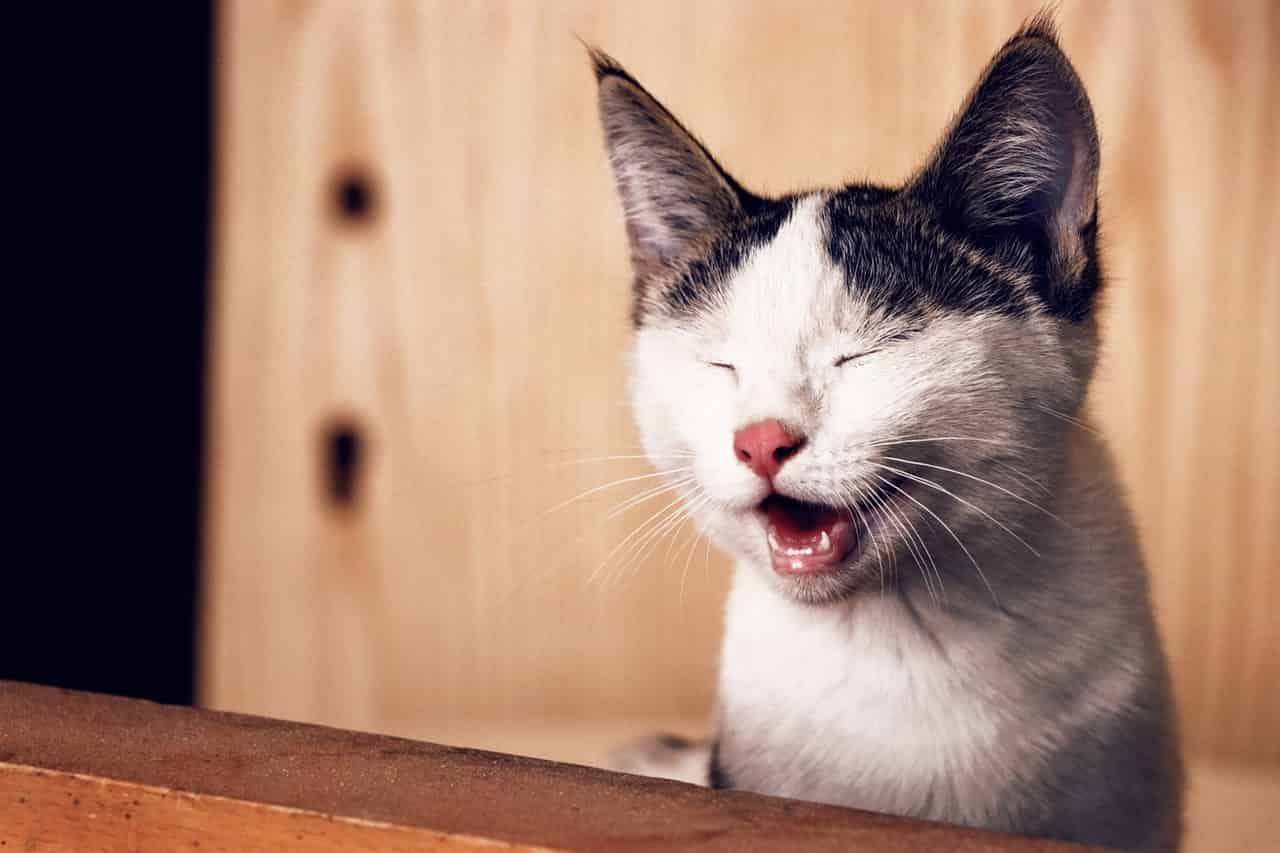 Just like humans, cats do the strangest habits when they need to go and do their deed. Some may scratch the floor, others may seem to want attention. And there are those that meow so loud before stepping into the litter box.

​Felines are one of the smartest animals to pet as they instantly know how to use their litter box But, it can be pretty annoying when they do and they start making strange noises you do not know how to control.

Why Do Cats Meow When They Poop?

There are quite a few numbers of reason cat act in such a way before starting their bathroom break. Felines often put into words by meowing to announce their bowel movements. It is either because they are uncomfortable defecating, or they just simply want to get noticed so you go to the bathroom with them.

If your moggy has always meowed before every single time they do their deed, that is one thing. But, if you just noticed them doing it now, that’s another.

Pay close attention to what your kitten is trying to tell you when, especially when meowing happens before, while, and after they poop. [Meowing is your mouser’s way of drawing your attention to their problem that needs your urgent care and attention.

Cat Cries Before Going To The Bathroom

Two of the major reasons cat feel vulnerable when going to the bathroom are;

When a tom announces he needs to go to the bathroom, he wants you to watch his back and stay close. Cats hate the feeling of vulnerability. They feel vulnerable the most when they are in the bathroom, doing their thing.

But, it should be in moderation. While they want you to keep an eye on them and have you nearby, they also still need their privacy. When they start to meow to signal a bathroom break, keep a trail behind him but keep your distance. Just enough to let him smell you and know you’re there.

That should give him the assurance that he is safe to do what has to be done.

Afterward, you react by cleaning up the area and removing the evidence. That should make him completely comfortable.

More Details on Why Your Cat Meows Towards The Bathroom

If meowing has been your tabby’s habit every time it goes to the bathroom, then it may not be something to worry so much about. But, if it has just happened recently, it could be a sign of something you should check. If it is out of your cat’s demeanor and it is something you have a bad feeling about, it is best to act on it.

Most cat owners think that if meowing sounds slightly a pitch higher or more frequent than usual, they need to get paid with extra attention. It wouldn’t be so bad to get them checked out by the vet, just to make sure and play it safe.

Potential health-related issues could be causing your cat to be loud before going to the bathroom. Not so much a big reason to alarm you but if you feel the meowing is out of character, it may be due to various health reasons.

Yes, UTI (Urinary Tract Infection) is fairly common in felines. Bacterium working their way up to the cat’s bladder results in painful infections. Aside from meowing before doing what they need to do in the bathroom, watch our for these common UTI signs in cats;

UTIs can be risky if left untreated. This infection could potentially lead to bladder stones or blockages. Catching UTI early on helps to keep the treatment simple. A set of antibiotics prescribed by the vet should clear them up in a few days.

However, if it has developed to something more serious like bladder stones, it could be more problematic, that surgery may be required.

The developing stage of UTI leads to intestinal blockages or bladder stones. These stones cause a blockage that makes it difficult for moggies to defecate or urinate. The symptoms are almost the same as that of UTI’s.

Medical attention is required for such a scenario. Especially when your cat is vomiting and the vomit smells like that of a fecal matter. This suggests that the intestinal block leaks feces into your kitten’s digestive tract.

​Bladder stones in cats are diet-related. While most suggest for surgery, VCA hospitals​ had a study that this sickness can be treated through diet. Preparing the right food for your cat can dissolve bladder stones.

Dietary treatment is a slow process and may take several weeks to show effects. This may leave the cat in pain for a longer period. If the issue is urgent, your choice is surgery. A faster and more effective solution, the process includes putting a catheter to remove the block.

If using a catheter is not possible, cystotomy or ureterolithotomymay be required. Keep in mind that while there is no surgery that is without any risk, these procedures are all considered safe. Cats make full recovery after.

Also, make sure to check with your veterinary about your cat’s pre-existing health concerns to make sure surgery is an option for them.

Closely similar to symptoms shown in cats with UTI, cystitis is when a kitten continuously attempts to urinate but can’t.

Cystitis is caused by an inflammation of the bladder. They are not related to any bacterial infection, rather it comes from within.

They are often related to stress, dehydration, and poor diet. To avoid this, keep your cats away from anxiety triggers. Encourage them to proper hydration. Consider a change in diet. Wet food is known to have a high water content that eases bladder issues in mousers.

Age-related confusion may manifest in cats meowing before going to the bathroom. As they get older, they get a tad bit confused that they do things that are unexpected. One too many times, cats make sounds before and after going to the bathroom when there’s not actually a thing to worry about them.

What To Do When This Happens

It may be tempting to quiet them down as it is to ignore them when they meow towards the bathroom. This is their way of communicating with you so try not to punish them or reward them wrongly.

Whatever reason your cat has for meowing, it definitely tells you she needs some assistance or she needs to tell you something. Same with humans. We don’t cry for nothing.

So, before considering ignoring or punishing them, check them out and find out what they are meowing about. Chances are they turn silent when you check and pet them.

Animal sounds can be confusing. What you may think at a simple meow could be a cat’s cry out for help. If you know your cat too well, you will know if how they sound like is something you should be alarmed with or not.

Hi There, Jonnah here. I am the co-founder of this amazing pet blog & a passionate writer who love helping pet owners to learn more about their pets through my articles.