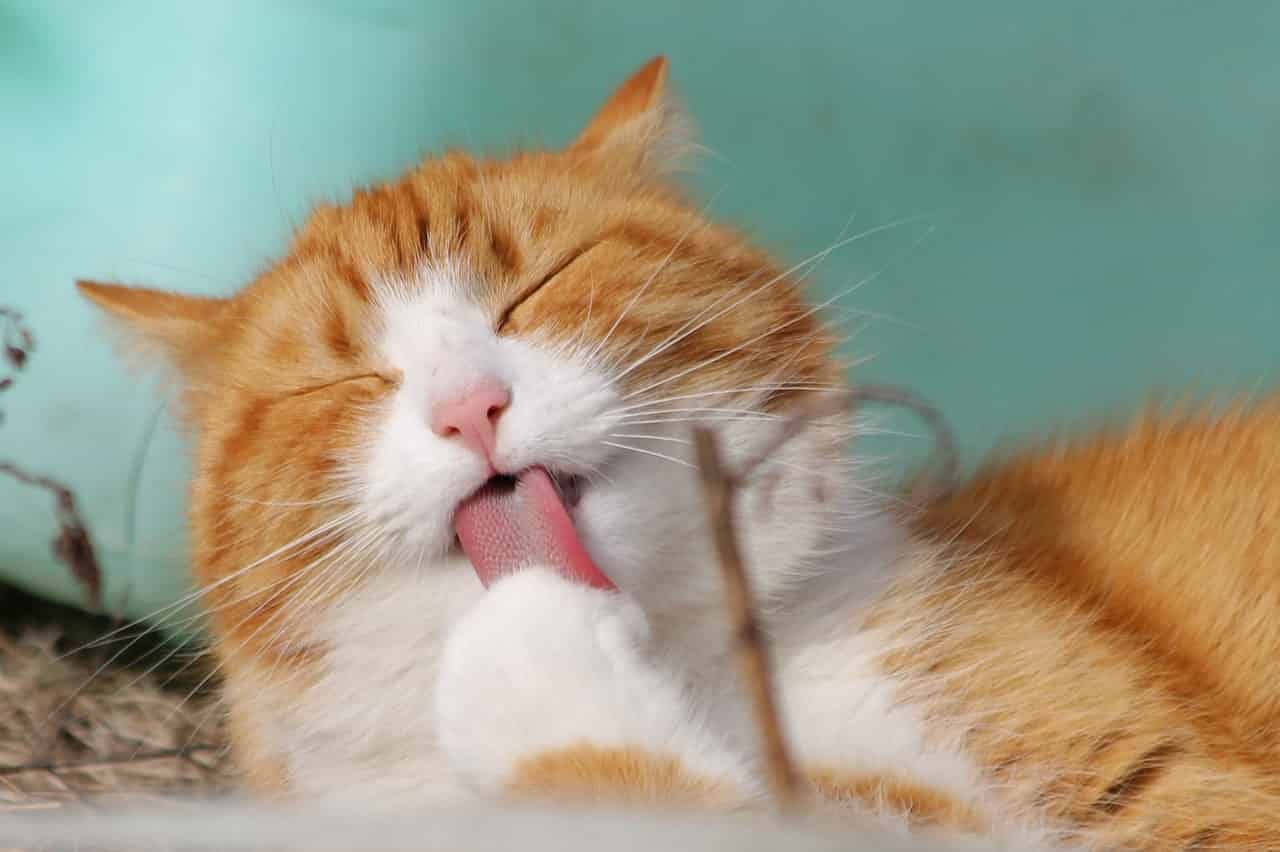 If you own a cat, then you know just how charming and pleasing (and agitating) it can be when feeling when they lick your skin. You understand that the way they clean themselves is by licking. It is natural for them to lick if they feel they are not clean enough.

Aside from cats being fastidiously clean, their sandpapery tongue making contact with surfaces can be a compulsive behavior for them. But, it truly depends on what they lick.

Whether it is you, the floor, or themselves, feline licking may have an underlying cause for each action. We’re sure you’ve asked yourself that question every time you catch them to do just that. We might just have the answer for you.

Felines have tongue covered in backward-facing papillae that function to aid in easier eating and effective grooming.

If you notice your furballs occasionally lick to groom or the food bowl after eating, you can be assured it is, but the tongue is functioning well. They are merely projecting proper hygiene habits in cats.

On the contrary, if you see your moggy licking nonfood items constantly, you may want to know why. Some of the common bits and pieces cats seem to gravitate to are;

A clinical perspective of the cat’s condition self groom excessively and lick non-stop is called psychogenic alopecia.

Female cats are more likely to exhibit such symptoms than males. Purebred, particularly the oriental ones are most susceptible.

On the other hand, when tabbies, aside from licking excessively, chew non-food items, they are best described as having a pica condition.

Your kitten may be having psychogenic alopecia or pica for a list of reasons. Few possible explanations include;

Let’s take a deeper look at some of the potential issues that cause your tabby to act weirdly.

Cats groom frequently. Grooming takes 30 or 50 percent of their time in a day. It looks all grooming and just that until you notice a spot on your cat where there is less fur, has gone bald, or lesions become present.

Aside from grooming, cats also lick when they are in pain or feel itchy. You will know whether it is an itch or pain depending on how and where they lick it.

Medical practitioners refer to toms going through such a scenario as fur mowers because clearly, they tend to mow away the fur on the area affected. This gives vets a clue where to act on first. Just by how and where they lick, doctors can determine whether the situation includes parasites (in kittens) or some degenerative or neurological disease (in older cats).

Flea infestation is manifested by constant licking at the tail head. Cats with allergies may lick their backs or abdomen.

Doctors may rule out medical conditions among the cat’s excessive licking. In which, they treat overgrooming as a result of the stress of some sort.

Boredom brings stress to moggies too. These creatures love interaction. As simple as finding out what your cat likes or when they like to cuddle serves as a security blanket to them. It promptly can relieve stress.

Excessive licking may start to show after moving to a new home, introducing a new pet or family member to the family, or a simple change in the litter box's location.

Bring them enough attention and engage in more playtime. This does not only distract them from licking too much, but they will also feel secure and loved.

If cuddling and playing won’t do the trick and continue to engage in incontrollable self-grooming, vets may prescribe pheromones to reduce unnecessary stress.

Pillows, walls, cords, and a lot more knick-knacks may catch the attention of your toms when they show symptoms of pica. It is when the cats show a weird habit of craving for non-food items.

Pica is one of the most common reasons why cat owners take a visit to the vet.

While it is more common in younger felines, they can also happen in older ones.

Aside from constipation, diarrhea, decreased appetite, vets see the condition due to a deficiency in fiber or fat.

Talk to your vet if your cat is constantly licking and discuss the dietary needs they may be lacking. Ensuring your cat is eating the right food for her breed and size is one way to prevent pica.

While you are at the vet’s nook, it could also be the best time to get your furball screened for diabetes and other diseases. Excessive licking, especially on random things, could be a symptom of something more serious.

Trying Out Something New

Cats are curious, thus the saying “Curiosity killed the cat.” This is why random and excessive cat licking could also be harmless and just a symptom of their innate behavior and curiosity.

If you notice your cat smelling or licking an item in your household, especially those that are new, it is just an indication that he is checking out what is that fresh smell.

Harmless licking is totally fine. Just be sure to make it safe for them, too. Dangerous substances and items are to be kept out of reach of your cat - toxic cleaning supplies, beauty products, and foods that are poisonous to the cat.

Cats are highly intelligent creatures. You can’t just leave them and be confident they won’t open the cupboard. They do!

In the event, your cat is as clever as that, safeguard human foods that are lethal to them like chocolate, coffee, and raw eggs on a high shelf, or with a padlock to put them off from licking them.

Cats don’t have molars as humans do. The way they break down food is done using the tongue. Before the food hits the belly.

As described earlier, their tongue has layers of tiny prickly spoons that, when it licks, can scour and scrape down a surface. That is how they do it with their food.

Cats don’t use silverware, because their tongue is already their spoons and forks.

Their tongue is pretty much their utensils. Their teeth have no molar rows, unlike most omnivores and herbivores use to mash and grind their food with. Instead, they scoop, pre-digest, and then swallow with their tongue.

Aside from themselves, cats also lick other cats. Not to clean them, sure they can do that for themselves. But, to bond. Rubbing and licking are the cats’ way of demonstrating social bonds with other animals.

This goes far from when they were tiny little kittens and had their moms lick them. Cats take that as a sign of affection. While that is true, mother cats usually do that to stimulate their breathing and suckling too.

Therefore, if you notice a cat rubbing, kissing, and licking you, it fairly means it loves you and is affectionate of you.

This mental condition exhibits repetitively and compulsively. They may be genetic or stress-induced.

A change in their daily routine and environment may help kick the behavior into full swing, especially when the cat already has a history of being anxious and with a nervous disposition.

Cat Licking as a Reason of Concern

Licking obsessively and excessively may be a reason for concern, especially if licking leads to chewing and swallowing. If your cat does, it may lead to a blockage in the gastrointestinal tract.

Observe your cat if they seem to be frequently licking or anything inside their mouth that are either too big for them to consume or are as a matter of fact, non-consumable.

Also, be on the lookout for instances where cat ignores their food, goes licking and chewing on other items, or has diarrhea, or vomiting. At its early sign, consult your veterinarian to rule out any underlying health concerns.

Alleviate the stressors for your cat by giving her toys and spending enough time with her. Allow for safe havens where your cat can be at peace and away from other pets and family members.

Your cat may be diagnosed with obsessive-compulsive disorder and may end up being referred to an animal behavior specialist.

In exceptional cases, medical practitioners may recommend anti-anxiety medications like selective serotonin reuptake inhibitors. You may ask your vet about homeopathic solutions too.

CBD oil in edibles or capsule forms is highly considered as well.

As with most untoward situations, prevention is better than cure. If you stop something terrible from happening, then you won’t have to deal with it.

Keeping your home free from tempting clutter is one step. It keeps them away from being curious about things they are not supposed to be curious about.

Not only will this keep your cat and others from getting electrocuted, but it will also keep from testing curiosity out of your cat. Make sure the cords are run through conduits to keep them protected.

Have the Right Plants

Houseplants may look cozy to look at, but they can be a harmful threat to your pets too. Some may be poisonous and lethal for furballs.

Make sure to only have pet-friendly plants like catnip, rye, or wheatgrass. Otherwise, put them on plant shelves and areas inaccessible to cats.

Stress and boredom are the two main reasons they become obsessive-compulsive. They have energy that is if unused, is released through their mouth by licking and chewing.

Additional play and cuddle time into your routine especially ahead of feeding, prevent them from tidying up. At least 30 minutes of your time in a day is enough for them furballs to keep them happy and not bored.

Cats hate citrus scents. Spray a little citrus or bitter apples to surfaces they usually like and bite on and whatever it is, the smell lowers down the appeal to them.

If you must, provide your tabbies with indestructible toys they are safe to play with to keep their minds off from licking items they aren’t supposed to be in touch with.

Knowing your felines' overall physical condition will give you a better understanding of not just licking but any unusual behaviors they show from time to time.

Whether it is a disease they are silently battling about or a poor diet, your vet will have a lot better recommendations than your friend who only has one cat he had experience with.

Hence the feline licking becomes a habit that persists even after the cause has been identified and resolved.

Usually, the behavior is eliminated or forgotten with the help of medication. This process may take a month or two to use up completely.

Solving an excessive licking issue with tabbies, whether the cause is psychological or physiological, will require time and patience on the owner’s part. Most of the time, attention, affection, and sticking to routine are the secrets.

It may take a while but once you get used to it, so will your moggy be. You will be surprised how one day, you will notice how much your mouser has changed for the better.