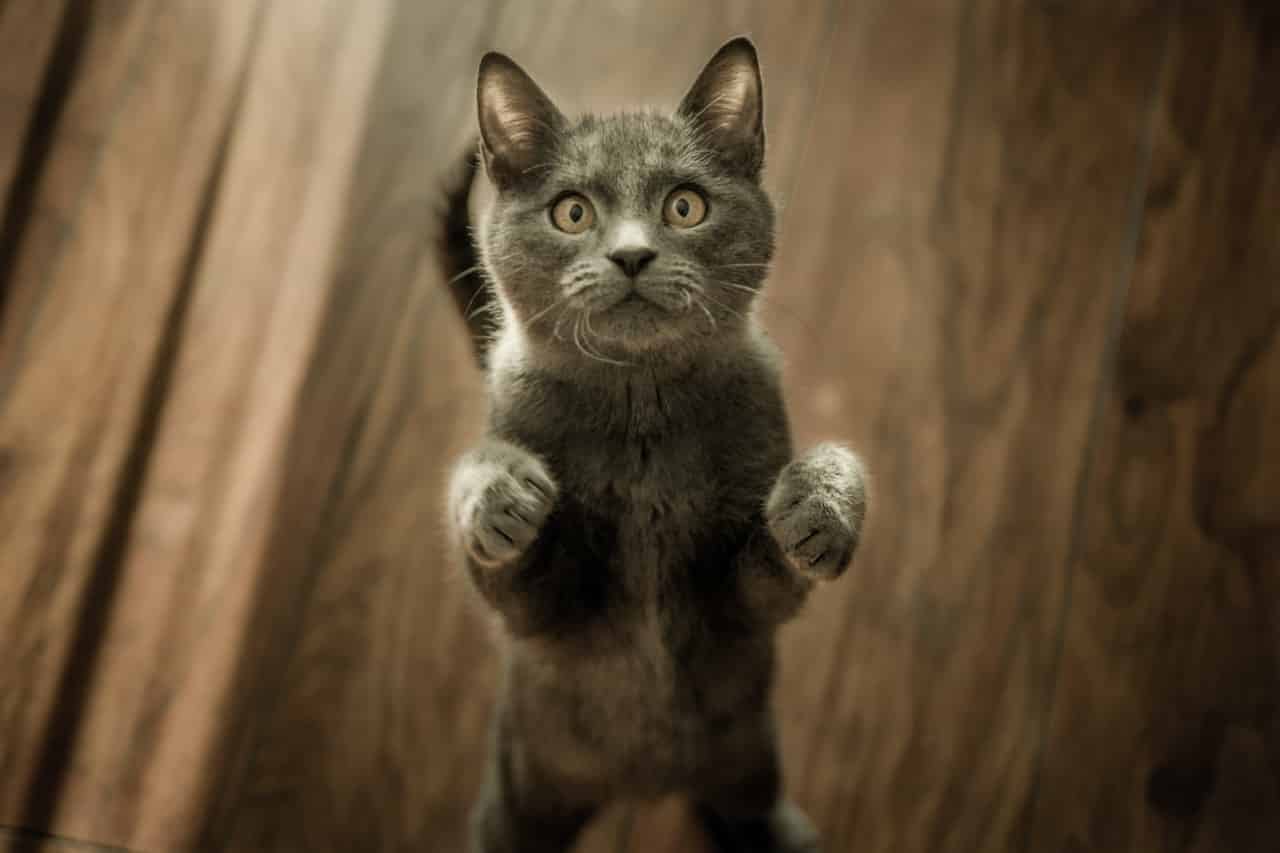 ​You already know it. Cats are wired. Don't you?

One of many wired behaviors they make is - they attack only the owner & no one else.

Does this happen to you? Looking for an answer?

​Bear with me for some time as I am going to explain why does your cat attack you and no one else.

At the most unexpected occasions, your cat, out of nowhere will ​hunt​ you like a wild tiger, wrapping her paws around your leg and sinking her tiny fangs into your skin. You think of reasons but you just can’t find any.

​You let it go and then it happens again. It will leave you to wonder why during a nice cuddle session, it may feel like you flipped a switch. That, in a snap, fur baby darts off and leaves you with a burning scratch across your arm.

You want to put an end to this behavior, but how?

The abrupt increase in cat’s aggression may leave you clueless, if not injured. If you can’t think of any reason that may have caused your furball to suddenly be aggressive, we just might have the answer for you.

Why Does Your Cat Attack Only You And No One Else

So Why does my cat attack me and no one else? ​There are many reasons why your cat might choose to attack you ​& no one else including​ fear and anxiety, behavioral problems, neurological or other health issues, or ​some miss communication styles between you and your cat.

​Let's look at them in a brief manner:

Fear is the root of almost all of the cat’s aggression and it doesn’t help that they have sharp senses. They notice possible threats in their surroundings like sounds, objects, persons, other pets, etc., More often than not, they’d rather walk or run away if they perceive the threats are too much to handle.

However, if they feel like they will fail in identifying viable escape plans, hostile behavior may show up, driven by fears. This aggression may manifest in forms of hissing, spitting, swatting, scratching, and growling.

You will want to leave your ​cat in that state for a bit before attempting to get her attention again.

While modern-day pet cats manage to channel different wild instincts because of domestication, they still have within them certain features of being predators. Territorial aggression occurs when a feline senses that an intruder is infringing on his territory.

Both tomcats and queens defend areas that they feel are their territories, though males tend to have larger territories covered compared to female ones. Most of the time, territorial aggression is directed at other cats, but people and other animals may be the subject of hostility, too.

​Another situation that is the most common cause of territorial aggression for cats is space issues.

For instance, when there are three cats with access to one litter box and one food bowl, the perceived rivalry over access to such resources may develop to territorial aggression.

Depending on situations, pet cats may treat humans in the household as outsiders that they start chasing, stalking, and pouncing them.

Triggers for territorial aggression may include introducing a new pet or a new member of the household, a recent move, or new cats in the neighborhood.

If you feel like your cat attacks only you and no one else, it’s probably because it is not really attacking you.

Your fluffy ball just wants to play, although slightly roughly, with you and you alone.

Rough plays ensue all the time between felines, so it is possible that your little kitty thinks you like that, as well. Innocent nibbles at your hand may progress to painful bites.

Cats exhibit play aggression but have no ill intents. They just simply want to play. And, this only means they need some time to get trained against treating your hands as if they are chew-toys.

Petting induced aggression happens when a furball who enjoys being pet swiftly changes his mind. While they surely love being pet, they can accept only to certain extents. It is believed that the repetitive motion over time turns from pleasant to irritating.

When cats feel that petting is getting uncontrollable, they send out warnings by biting, hissing, or nibbling. In cases with well-behaved cats, they warn whoever pets them in a rather gentle way and their attacks rarely leave painful injuries.

On the basis thereof, once you perceive petting induced aggression from your fur baby, it would be best to let it go before the condition escalates.

The most frustrating reason is redirected aggression. It is the most, erratic, unpredictable, and dangerous type of feline hostility.

To put it simply, cats may be agitated by someone or something and if they can’t do something with it, they are going to lash out. These scenarios leave the cat in a hyper-aroused state.

​A patient who owned a cat walked into the ER with scratches and bites.​ When asked about their environment, they realized the aggression was due to an external stimulus.

The patient lived in a neighborhood where squirrels are free to run around the backyard.

Since, the feline was inside the house and couldn’t chase, in the patient’s blameless state, she became the receiving end. The cat released his pent-up outburst out of nowhere.

Redirected aggressions last long after the triggers have left the scene, making the pet look like they just flipped mad.

As a pet owner, you will know when your cat looks frustrated. At the sign of frustration, refrain from approaching them and just leave them be for a while.

The Look of Aggression - Signs That Mean, “Keep Out!”

You may not notice but the cat’s posture greatly indicates offensive aggression that may give rise to an attack. Do not attempt to comfort or soothe the feline if he shows the following signs;

While most of these signs are present in defensive aggression, the most obvious and distinguished signs are the ears, vocalizations, and awkward movement of the cat-like backing away or creeping forward.

Animal Planet show My Cat from Hell who stars the cat whisperer, Jackson Galaxy, shows problem cats and how to resolve them.

​Here’s one episode where cat owners were close to giving up their cat because of its sudden aggression.

In the complete episode of this trailer video, Jackson approached the cat trying to figure out the line between its being predictable and unpredictable. He does this by reading the ears and the eyes, whether they’re standing in a certain position or dilating.

If you happen to see the ​whole episode you’ll get a better picture of redirected aggression. The cat is unspayed and hormonal. Her habit of peeing all over the house attracts tomcats, resulting in them marking their spots outside the house.

The tomcats' activities outside the house leave Larry (the subject cat) frustrated that she can’t deal with these outsiders and so she lashes out on her owners. Jackson thought it would be better to have her spayed and the whole house clean, so she can have a brand new start.

The story ended in a happy mode. Larry became less aggressive and there were no more sudden rages.

Cat Bites Can Be Dangerous

While feline, especially the domesticated ones lack the ability to slay humans outright, their bites may prove fatal it treated lightly. Their sharp teeth warrants that the bites they do leave deep punctured gashes. Plus, pets may brush their teeth but not regularly, which means, bites would host large amounts of bacteria into the wound and straight into your body.

Cat bites are severely prone to infection, just as much or maybe even more so than dog bites. The reason is the sharpness of the cat’s teeth that punctures deep and hard, making it difficult to clean.

A team from American Society for Surgery of the Hand showed that 1/3s of patients who required treatment for cat bites in a 3-year period had to be admitted, while 2/3s of these patients required surgery to swill out the bacteria through debridement.

Even though the cases of humans contracting rabies are unusual, cats are the pets that are most frequently found with this virus.

What To Do If The Cat Suddenly Becomes Aggressive?

You sure would want to know why your cat is acting indifferent towards you and you alone. But, it is also just as critical finding out what to do in such scenarios. Although various issues entail different treatments, there are common rules that you must remember at all times.

If you feel like the situation has gone beyond your control, it is totally fine to call in professional’s help. Veterinarians can observe and study your cat and make sure he does not have a medical condition triggering the unwanted behavior.

Depending on situations, either the vet offers medication, diet plans, a trip to a cat behaviorist, and so on to steadily lessen the aggression of your cat over time.

Don’t Run Out of Patience

It is frustrating, mentally draining, and painful to see the fur friend you love to attack you, plainly and literally. Even so, it is essential that you act rationally and sensibly. The cat’s sudden aggression may push you to hit them in hopes that you can correct their behavior, don’t.

In spite of the untoward incident, avoid punishing the pet. Doing so will only leave negative impressions which may strain your relationship with them. As with any pets, any form of aggression towards them will just make them fearful of you.

Be Mindful of Suspicious Signs

More often than not, you will be caught off guard by your cat’s sudden aggression. Leaving you clueless about what could have triggered him. Cats may attack out of nowhere and they may do things that may make you say, “he’s never done this before.”

But, there are always suspicious signs that you may have missed. These are clues in pinpointing the trigger for their aggressive behavior. Protect yourself by understanding your cat’s body language.

A small change in how their tail points or how their ears stand up say a lot. Recognizing these is understanding your cat’s behavior. This will help you identify the reason that your cat attacks you, and from there you can work on it.

Being aware of early signals of a feline that is just about to freak out allows you to remove yourself from the situation before it arises to violence.

Even when you are the owner, you cannot always control what causes your cat’s anxiety. What you can do is give the cat the space they need to chill and wind down without hurting anyone.

Keep calm, do some good detective work, and you won’t realize you’ve become a cat whisperer yourself making cats quickly go back to the kind nature they have.

Cats are without a doubt loved and adored by millions worldwide. Despite the dangers present from their razor-sharp claws and teeth, they are still being taken home and made pets.

Do they pose a serious threat to human health? Maybe. Have domesticated cats ever killed a person? Maybe. This kind of cat behavior can pose a real danger not just to your but to the whole household.

But, so long as you have a good understanding of your feline’s behavior, why your cat suddenly attacks you, what you can do to stop him from doing so, sudden attacks may rarely happen, if not at all. It can also be a big help in improving your relationship and interactions with your feline. Hi There, Jonnah here. I am the co-founder of this amazing pet blog & a passionate writer who love helping pet owners to learn more about their pets through my articles.