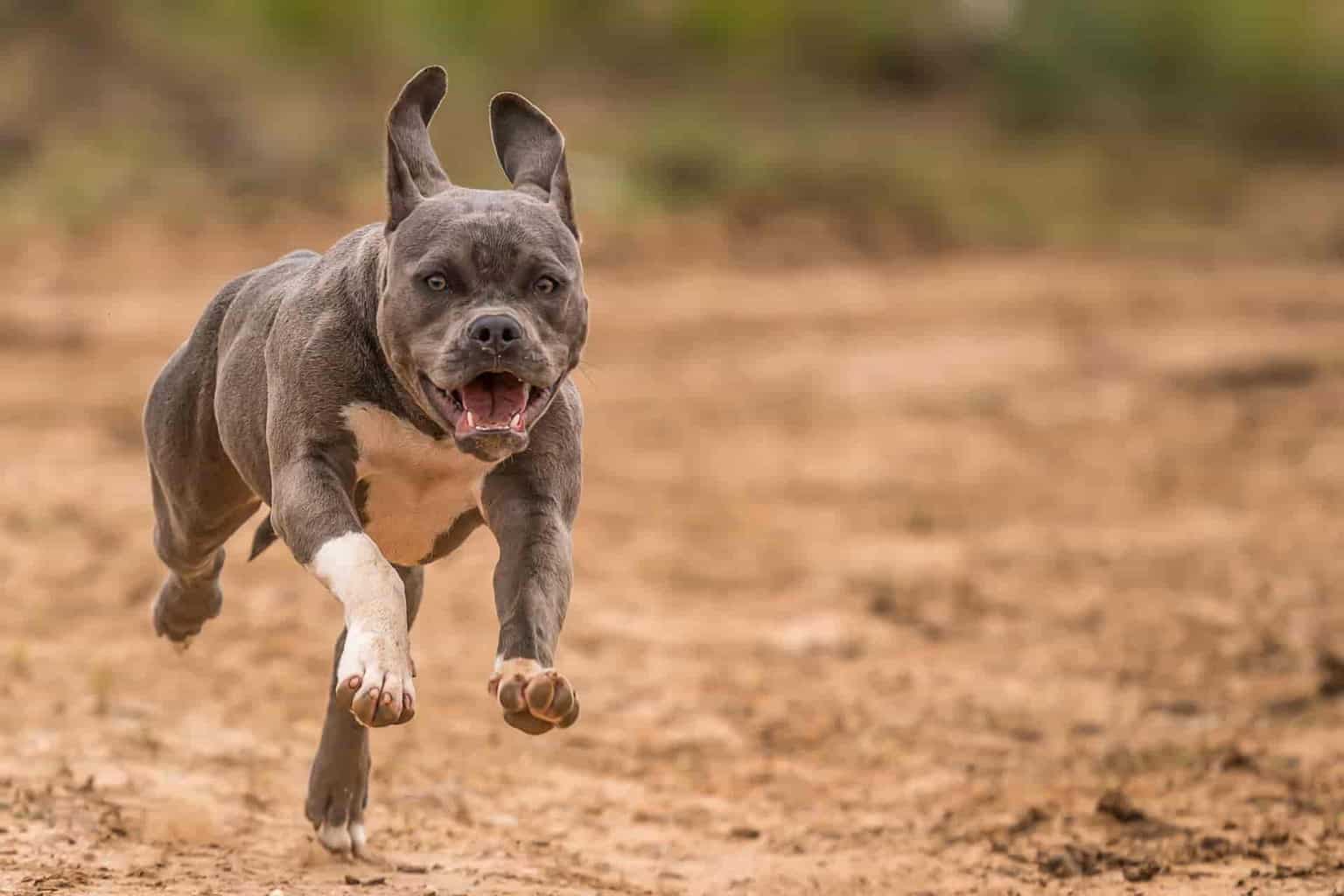 Dogs convey their messages to us in various ways. Pitbulls, like many other dogs, are known to do many cute things. You might have seen your pitbull cuddling, rolling in blankets, on his back, in muddy areas, and making goofy faces.

Have you noticed your pit bull’s ears standing erect when they are excited? It is a way they are expressing themselves.

Most pit bulls perk their ears when they hear their name, smell something delicious, notice a new thing, or are too excited. Let us dig a little deeper into this topic below.

Why do my pit bull’s ears always stand up?

A pitbull’s ears stand up because of many reasons. They are as follows.

The ears of Pitbulls resemble a wolf. Though many characteristics of this breed match with others, such as St.

Bernards and Basset Hounds, the ears are quite different and unique from them. Even when your pitbull is relaxed and is at ease, his ears can stand up naturally. It gives them an exclusive appearance.

The way Pitbulls look different from other breeds can also vary within their breed.

They have gone through breeding over so many years leading to many dissimilarities within themselves.

Pitbulls of various sizes can differ in the firmness of their ears.

They are hunter dogs and not for domestication. That is why cute floppy ears were not a desirable feature among them. Due to these genetics, their ears stand up and also curl down at the top.

You might have noticed your pitbull’s ears perking up suddenly when he is excited. It can be at times when you call out his name, or you meet him after long hours.

When they are excited, they do a couple of more things, like shaking their tails and opening their mouths slightly.

You can also see the shine in their eyes when they look up to you for treats or a walk. Their ears do not point in any particular direction. Instead, they point up straight.

3. Pitbulls are in alert mode when their ears are up

Standing of ears may also be a sign of alertness in Pitbulls. This alert mode can get turned on when they smell or see something distinct. Anything that seems fishy such as a person, a cat, or an object, can bring this state.

If they hear unfamiliar sounds, their ears point in the direction of that sound. To have a clear look, they may also tilt their head and neck in that direction.

The dogs also look concerned and will also make his tail rigid.

Your pitbull is trying to analyze the sound of a distinct object. He is evaluating if it is a threat or not. If he thinks something can be threatening, he will bark to alert you. If you know everything is fine around you, calm him down.

When a pit bull is trying to establish its dominance over some other dog or animal, his ears might stand up straight. He will show him strong by standing tall and leaning forward.

His ears will also be rigid and pointed straight up. It is a way to make him appear large and dominating over other animals. He is trying to intimidate other dogs around.

5. It is an indication of careful listening

Your pit bull might raise his ears to listen to something. This also happens in the alert mode, but there it is accompanied by several other indications.

When he is calm and still perking their ears up to a sound, he might be attentive rather than alert. If he is sleeping and someone speaks up, he may raise his ears to listen attentively.

They have superior hearing abilities.

Even the slightest noise of footsteps can trigger them, resulting in such reactions.

They can hear even those sounds that a human ear can not detect. Pitbulls are guard dogs, and hence this feature of perking up ears in the direction of sounds is a must.

A part of dogs’ ears made of cartilage and covered with fur is known as the pinna. Every dog has this structure that collects sound waves from the surroundings and drops them to the eardrum.

Pitbulls have short and rigid pinna, unlike Cocker Spaniels that have long and flexible pinna.

This cartilage tissue makes the ears stand up.

It becomes strong around the time when the dog is eight to ten weeks old. In some, it might even take more months. When the pinna is strong enough, the ears perk. The pinna gives support and holds the stoop-up ears in Pitbulls.

7. Cropping of the ear

Cropped ears are a desirable feature in dogs because it prevents infections. In hunter pit bulls owned by the police, people intentionally clip the ears to stop bites by other dogs.

Many people get this done in puppies; however, this practice is illegal. There is no evidence that floppy ears can lead to ear infections in Pitbulls.

Sometimes, Pitbulls have one ear up and the other ear down. It can be due to various reasons, like malnutrition, ear problems, and one cartilage being stronger than the other.

Certain breeds like Corgis, Boxers, Great Danes, and many more have one floppy ear. The mixed-breed can also exhibit one floppy ear. A high dosage of prednisone or prednisolone can affect the ears of your pitbull.

The best way to be sure is to check the puppy before adopting. We understand that you will adopt a puppy from a pet shop or a breeder. But, do inquire about the parents of the puppy.

Seeing the parents will give you ideas about the features your puppy will grow up with.

Get the puppy pitbull examined well by a vet before you get him home. One reason for ears not standing up can also be because the dog is too young. There might be nothing to worry about.

Do all dogs’ ears always stand up?

Yes, all dogs’ ears stand up. The age at which this feature shows up is different from the various breeds and individual dogs. Alaskan Malamute and Siberian Husky puppies show erect ears as young as three weeks. Complete erection is when they are six months old. You might observe that in their growing years, their ears stall halfway up or down.

Sometimes one ear is erect while the other is bent down.

The Pembroke and Cardigan Welsh Corgis puppies show up with erect ears at the age of eight weeks. All these dogs have fox-like ears, and in some individual dogs, ears never stand up.

Puppies of English Blue Terries start raising their ears when they are three months or four months old. The Chihuahua puppies can take up to eight months to raise their ears fully.

Some puppies achieve this feature when they are between five and fifteen years old.

Yorkshire puppies raise their ears when they are three to six months old. Some can also take nine months to do it.

According to breeders, Australian Cattle dogs, also known as Blue Heelers, can take twenty-four weeks to demonstrate the feature of erecting ears.

Some healthy puppies can show it even at the age of five weeks. Breeds like Dobermann Pinscher, the Great Dane, and the Schnauzer do not have naturally erect ears. Instead, they have cropped, bandaged, posted, or taped ears.

For mixed-breed dogs, the features of parents will decide the characteristics of the puppies. If both parents have high-set ears, like Tamaskan or the Alaskan Shepherd, the puppy too will have erect ears.

Breeders say that a puppy can inherit genes from any parent if one has erect ears and the other does not, like the case of the Shepherd Pei.

The puppy can have erect as well as folded ears in this case. Sometimes such breeding can also produce hybrid features. That is, the puppy might show half erect and half folded ears.

Some Pitbulls have erect ears, while some have cropped ones. In some Pitbulls, the ears keep standing and sitting between the intervals. All these characteristics are genetically inherited.

Some breeders also surgically crop the ears by clipping with scissors.

The vets then wrapped the ears in bandages until recovery.

This feature might pass on to the next generation puppies as well. Medical science has no proven benefits for cropped ears. It is better to retain your pitbull’s natural ears.

Retaining natural features will keep them healthy and happy. Along with observing standing ears, you can watch out for other body language to know if he is excited, alert, nervous, playful, or tired.