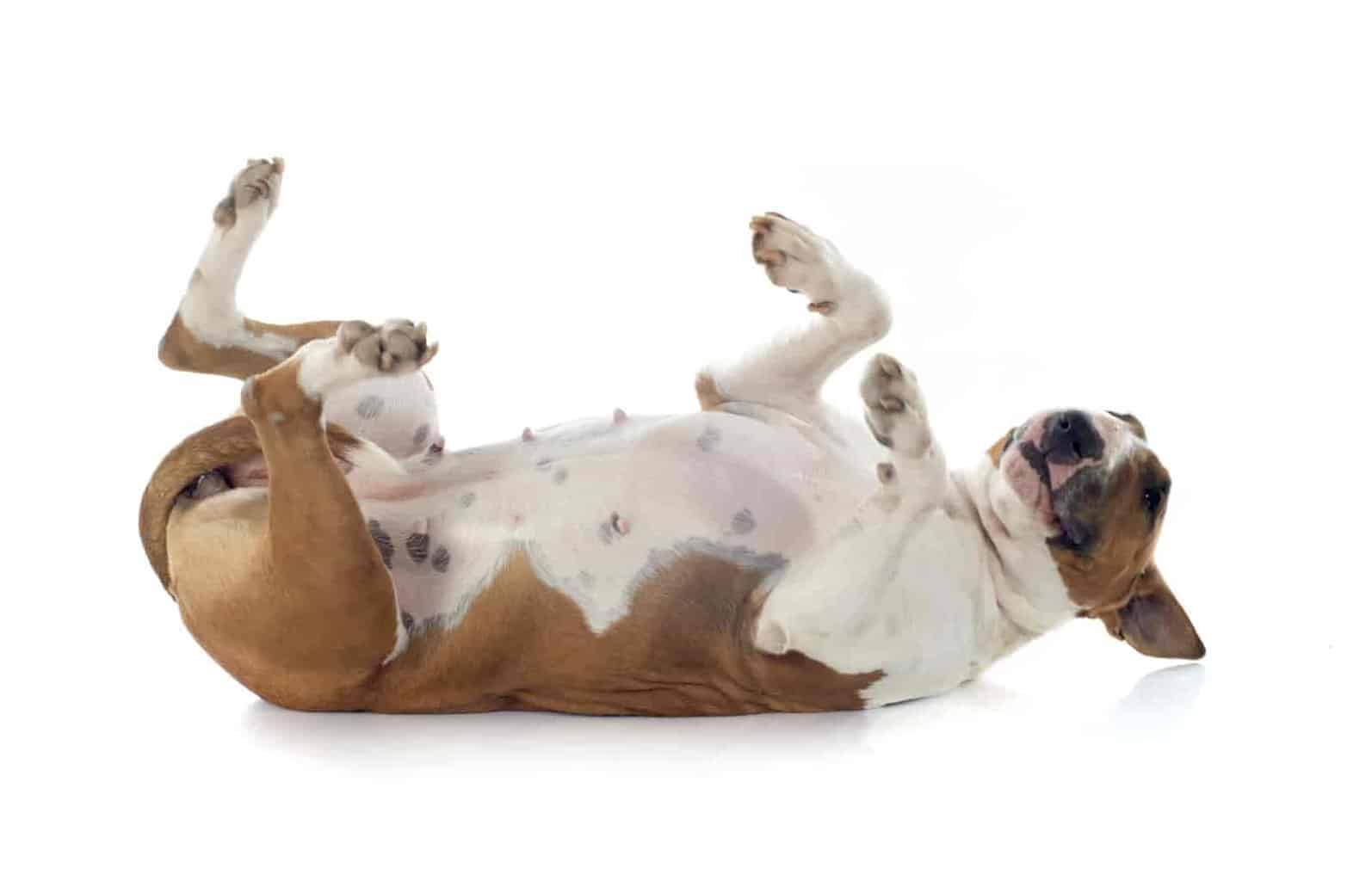 Dogs cannot speak, so they use many different ways to communicate with their human friends.

The most common way they talk to us is through body language. Your pitbull will make eye contact with you, facial expressions, and various positions to express him.

Pitbull rolls mostly on their back, exposing all four legs in the air.

Exposure of their belly while rolling back is also a way they adopt to vocalize. It is not something to worry about, but you should know the possible reasons for this behavior. Keep reading to find out.

Why does my pitbull roll on his back?

Your pitbull can roll on his back due to many reasons. The most probable answers to this question are as follows.

1. He wants your attention

Your pitbull is a greater attention seeker than you think him to be. They are always on the verge of being the center of attention. Rolling on their back is a way of asking for approval or wanting your attention. By exposing their belly, he is asking you for a quick belly rub session.

He may also want to spend some time with his human friend.

Your pitbull might also roll on his back while playing with you.

When your dog is in a relaxed state, it means that he likes you rubbing his belly. But when he puts his tail in between the legs, it means he is tense, and you should stop.

2. He is scratching certain body parts

Your pitbull cannot reach out to all the body parts to scratch. Since dogs keep playing on muddy areas, they are likely to have developed an itchy spot on the body.

If he is rolling his back on grass, footpath, or any other textured platform, he might be scratching his back. The rolling motion will give him some sense of relief.

If he is doing this often outdoors, you must look into the matter as rolling on pavements can cause him an injury.

Look for skin allergies or parasites in his hair that are responsible for itchy and dry skin. Take him immediately to the vet cause itchy skin can make him uncomfortable.

3. It is a way of regulating body temperature

Dogs have higher body temperature than us, and the only way of regulation is through panting.

Your pitbull does not sweat like you and so feels hotter.

He might roll on cool platforms exposing his belly to bring the body temperature down. You can switch on the air conditioner to help him deal with the hot and humid climate. It will make him stop rolling over floors.

Pitbull often rolls on his back in front of the owner as a sign of his submissive nature. In this way, he shows his respect to you. It indicates that he identifies you as the authority and would not challenge you ever in the future.

5. He feels safe and secure with you

If apart from rolling, your pitbull also sleeps on his back in front of you, this means he feels safe and secure with you. He is confident that no one will hurt or try to harm him as long as you are with him.

Your pitbull has the confidence that he will be taken care of even while sleeping. Lying on the back is a comfortable position for many dogs, and so might be for your pitbull.

6. Rolling on the back is his obsessive behavior

If your pitbull frequently rolls on his back, it is possible that he is obsessed with this activity. It is a sign of obsessive disorder. In this case, you need to divert his focus to other activities. You may also need to consult a canine behaviorist.

While this act of disguising the scent was common in wild animals earlier, it is possible that your pitbull still inculcates this behavior.

It is an activity that dogs have inherited from their wolf-like ancestors.

Your pitbull might be rolling on something that has a less dog-like smell to hide from a predator.

This activity is useful for those dogs who have to survive in wild areas. Pitbull is a pet, and so the chances of this reason behind his rollback are less probable.

Rolling on the back does not always mean submissiveness. Your pitbull might try to show dominance through this activity.

If rolling on the back, the dog does activities like staring, making direct eye contact, and many more is an act of dominance and is a great fight position for them.

Do not approach them at this state as they might growl, snap, attack, or bite you.

Work on his behavior with the help of an obedience school or a veterinary behaviorist. Your pitbull dominating you is not a good sign and must get controlled as soon as possible.

Dogs play with each other by rolling on their backs and talking to other dogs through body language. It is a way of facilitating play. The pitbull might also roll in front of other dogs to show he is not a threat and instead wants to play.

Mostly you need not worry about this behavior of your pitbull.

The dog is doing it to seek attention or because the pitbull loves doing it.

You are his guardian, and so you might know him the best.

If this activity worries you, assess the situation and seek the advice of a canine behaviorist or a professional dog trainer.

If you see him constantly rubbing a particular part, this is due to a skin allergy or ticks. Always take him to a vet in this case.

What does it mean when dogs roll on their back?

The most common root of this behavior is an itch. There are various spots, especially the back dogs they cannot reach out to. They roll on their back on pavements or rub against any furniture to alleviate a back itch. Since dogs play in muddy areas, occasional itching is normal. But if they continuously itch at a particular spot, look for possible ticks and fleas.

Why do dogs roll on their back and wiggle?

Many dogs like to roll on their back and wiggle. Rolling on grass, especially in hot weather, is a fun activity for them. They sometimes also do this to mark their territory or get rid of an unpleasant smell from their bodies. Other reasons can be a rash, irritated skin spot, or just an obsession.

Why do dogs roll around their backs and wiggle?

The answer is either to relieve an itch or to mark it with scent. It is a known fact that the sense of smell is very active in dogs. More than any sense organ, they use their noses in many situations. They roll on a carpet to make it smell like their body. It is a way of marking their territory and telling others that this is their place.

Pitbull can roll on his back for many reasons, which might be different from what we have mentioned here.

Since you cannot communicate with him using words, neither can he tell you what he is feeling; the only potential solution is to examine the situation well.

In most cases, there will be nothing to worry about or to show concern to.

It is common in dogs. They roll on their back, as it is a fun activity for them, to get attention or to get a belly rub.

The only situation to look for is when they roll or rub their body due to itch. Check for any possible rashes and consult your vet.