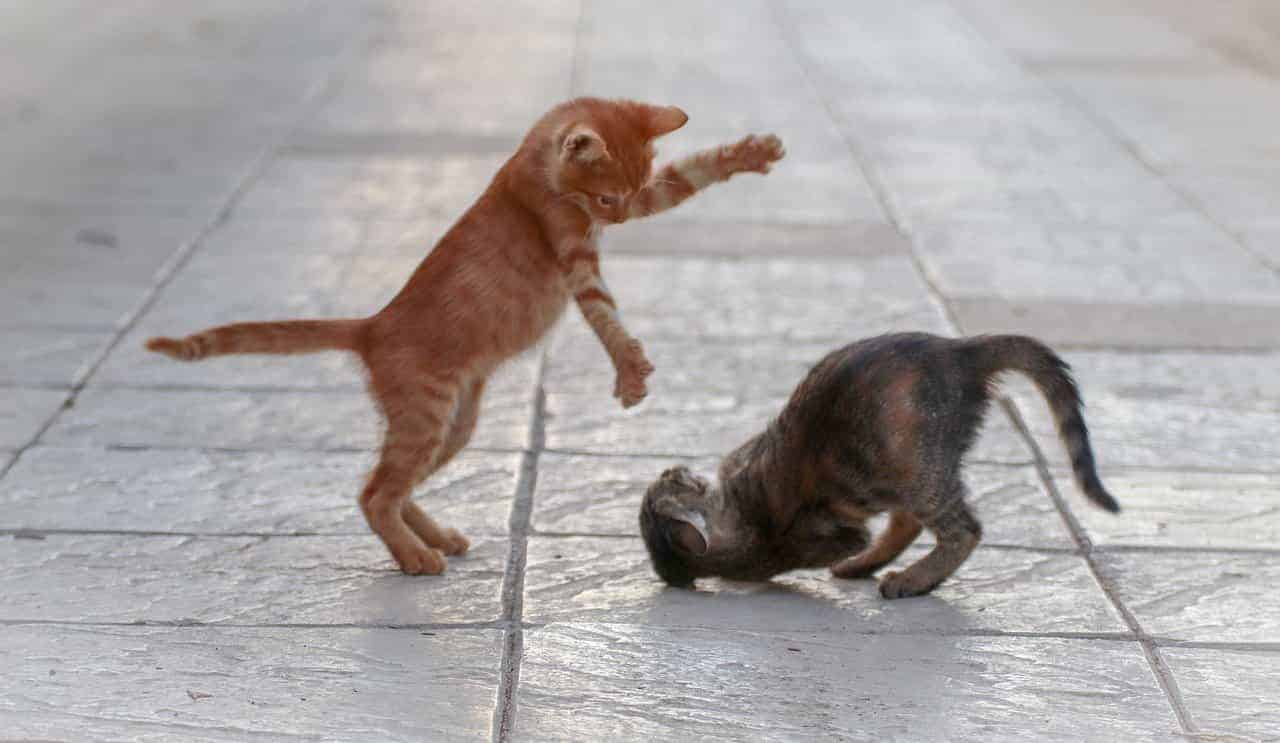 Cats are solitary animals and love to stay alone. If you have two or more cats in the house, there is a possibility that you might notice certain peculiar behaviors among them, which includes smacking and slapping each other.

They showcase such traits for a variety of reasons. It is usually harmless and considered a playful gesture until they fight with their claws out.

Why do cats smack each other?

If you have two or more cats in the house, you might notice that the cats repeatedly smack each other out of nowhere.

The cats usually do so to assert dominance over one another. If you look closely, you will notice that one of your cats usually starts smacking the other first.

The cat which starts the fight is the one trying to dominate the other. Smacking is harmless in most cases, but you need to be careful that cats do not become aggressive and hurt each other.

Once they achieve a mutual understanding among each other, they will immediately stop smacking and fighting.

However, it is essential to discipline the cats when they start to smack each other to maintain peace in the house and to help them get along.

Cats are territorial animals and tend to become aggressive when they feel that there is a threat in their territory.

If you notice feral cats smacking each other, there is a possibility that they might be fighting over their respective territories.

If the cat does not have a chance to socialize with other cats from an early age, they are likely to lead a solitary life.

These cats do not allow any other cats into their marked territory. They would rather fight and hit each other than sharing their spaces.

Therefore, it is crucial to expose the cat occasionally to other cats if possible to avoid such a scenario.

They should be allowed to socialize, and their fights need to be intervened. If both the cats become aggressive, it might lead to severe injuries.

Cats do not always smack each other out of aggression. They also do it when they want attention from the other cat, or they simply want to play with them.

When they are in a playful mood, the cats smack one another quite softly.

Cats also hit each other lightly to attract their owner’s attention and to invite him/her to play with them.

Since the household cats have a lot of stored energy, playing with each other in such a manner can prove to be quite helpful.

An adequate amount of playtime is necessary for the cats to have a sound body and a sound mind. You should keep a close eye on them when they are playing to ensure that they are safe with each other.

Cats might also smack another cat when it is not feeling very well. If they are having any kind of internal infection, they tend to be irritated and annoyed quickly.

In such a scenario, they do not welcome the presence of another cat near them.

Cats smack each other aggressively when they are not at the best of their health. If you notice your cat becoming violent all of a sudden, you should consult a veterinarian and address the underlying cause.

Sometimes, cats in the same household do not get along with each other due to a variety of reasons.

If your cats dislike each other, there are chances that they might continuously fight and smack each other. They might also perceive the other cat as a threat and therefore feel the need to defend themselves.

Fighting among cats can be problematic as they disrupt the peace of the house. If you notice that the cats hiss and growl while they smack one another, it is a sign that they are aggressive.

These cats usually fight with their claws out to harm the other cat. To control such aggressive behavior, you should disrupt their fights and interfere as much as possible.

Cats should also be allowed to socialize from an early age to avoid such situations.

Is fighting or slapping between cats normal?

It is very typical for cats to fight with each other. They fight for a variety of reasons like territory issues, life threats, or to assert dominance.

They usually involve in fights and slap each other because they feel the need to showcase their power and to dominate the other.

Slapping is their innate defense mechanism against anything they perceive dangerous. But, they could also playfully slap each other with retracted claws.

Fights between cats are not always indicative of their hostility, but could also be proof of their friendship.

However, constant fighting between two or more cats is not normal and could lead to severe consequences.

Such behavior does not end on its own and might even worsen over time. If you notice frequent aggression among your cats, you need to address such behavior and seek opinions from an expert.

Ways to keep your cats away from fighting each other

If your household cats are aggressive to each other, you need to address their behavioral issues as soon as possible.

The most common reason for catfights is their lack of socialization. Therefore, you should ensure that the cat is allowed to mingle with others from a very young age so that you do not face any problem when you adopt another into your home.

If a fight breaks out between the cats, you should never allow them to reach an understanding on their own.

These felines would fight as long as they are not intervened, and they tend to get worse over time. These cats should be separated as soon as they start to fight and should be kept in different rooms for some time.

You also need to appreciate the moments when they are friendly to each other and reward them with treats to encourage such behavior in the future.

Male cats tend to be very territorial and aggressive, especially in the presence of another male. Their aggression can become uncontrollable, and they might indulge in violent fights if they are unneutered.

Therefore, it is essential to neuter your cats maintain peace in the house. Some people also find the use of specific pheromones helpful to reduce the fighting tendency among the cats.

If your cats do not like the company of each other, their items of daily need should be separated. Their food bowls and their sleeping beds should be kept in different rooms.

You should allow the cats to interact with each other daily for some time. However, these sessions should not last very long, and the cats should not be left unsupervised.

Once they are assured that the other cat possesses no threat to them, they would slowly ease themselves and start to enjoy the company of the other.

Cats are naïve and do not easily understand the value of bonding with another cat. Therefore, you should act as the mediator to strengthen their friendship.

You should closely notice the behavior of the cats in the presence of one another.

Good behavior and interaction should be rewarded, and fights should not be welcomed. Although it might need some effort, it is never impossible to get two cats to get along.