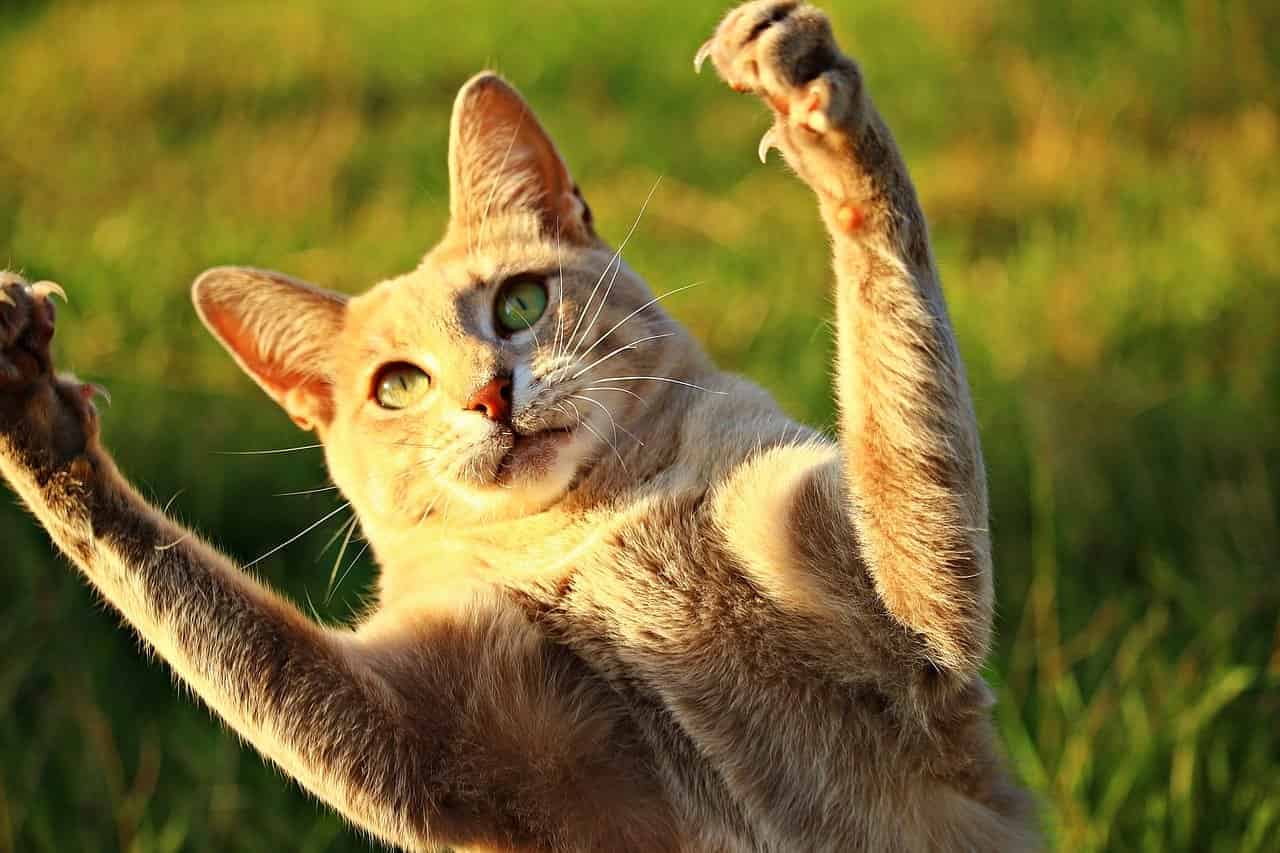 Cats are a mysterious animal that has left scientists amazed for ages. Keeping these things aside, no one can disagree that cats are equally neat and cute.

Their silky-touch hairs, sparkling round eyes, short legs, and the way they meow are all to concentrate all day long.

If you own a cat and have cleverly noted it exhibiting a range of actions to your amazement, I bet one of them is folding (curling or crossing) the paws. Right?

If you have noted your cat doing this very often but don’t know the reason behind this, continue reading to find out about this.

Why do cats fold their paws?

If you have ever witnessed your cat or any cat folding, curling, or crossing its paws, there are several reasons behind this.

However, the most common reason is that cats fold their paws to feel relaxed or feel comfortable.

To describe this, you’ll notice your cat lying upright over its belly, with both front legs extended in the forward direction and slowly crossing them over one another or merely folding them.

After doing this, they will rotate their eyes around the entire room to behave as if they are waiting for someone special to arrive.

Besides this, there are several other reasons behind your cat folding its cat, which you’ll find later in this article.

Meaning of cats folding their paws

Cats are some of those animals that exhibit several actions, among which one is folding their paws.

The exact meaning behind this behavior of cats is still not concrete as per the experts. However, for reference, a cat folding its front paws indicates its relaxed mood or comfortable mood.

Reasons your cat is folding its paws:

As said above, there are several reasons behind your cat folding, crossing, or curling its front paws. Some researchers label this position as the “loaf position.” Let’s discuss the reasons behind this behavior below.

1. Your cat is feeling comfortable and relaxed

If your cat is folding, crossing, or crawling its front legs, it can signify its relaxed position or if she is feeling comfortable.

Just like humans stretch their bodies to feel comfortable and relaxed, cats replicate the same through their front paws.

2. The cat is unwilling to communicate with anyone.

Just like every animal exhibits a unique behavior or action to indicate their unwillingness to communicate with anyone around them, cats too fall into this category as you would know that cats are super human-friendly and great attention seekers.

However, due to unknown reasons, she may behave strangely and feel unwilling to communicate or play. To test this, go and try to ask your cat for play while folding her legs.

She will either move out from there or doesn’t respond to you either. Some owners assume their cat to be suffering from any issue for showing this sort of behavior, but vets certify that it’s natural and nothing to ponder over.

3. Your cat is preserving her body heat by folding her paws.

If it’s winter season around you and your cat is feeling cold, she is more likely to preserve all the amount of heat her body has stored inside to an extent.

While some cats curl up their entire body to preserve their body heat, others find folding their paws in to do so.

To test it live, take your cat out to a cold location and see her turning into a loaf. Mark my words, cats appear super cute in the folded position.

Dogs may keep their eyes scrolling here and there and the ears upright to enter the alert mode. But the cats denote their alertness differently.

While a cat sitting folding its legs may appear relaxed and comfortable, it is alert and suspicious of its surroundings.

Try doing something suspicious around your cat while it is in a relaxed position to test it out. It will more likely get up and come closer to you to see what’s happening.

5. Your cat doesn’t want to get touched.

Yes, this may go against cats’ nature as they are human-friendly and attention seekers, yet they may feel against it.

At times, unknowingly, they may behave like a touch-me-not plant and fold up into a loaf for not getting any touch from anyone.

Also, as cats are hunters by instinct and love isolation, they may try to go into an isolated environment by folding their paws. Hence, never allow your kids to touch any cat while she is in isolation or alert mood.

Another common reason why your cat is folding, curling, or crossing its paws is that she may prepare herself for a quick nap.

Cats usually sleep in the position they sit in for the longest time.

For example, if the cat is sitting with folded, crossed, or curled up paws for long, she is ready to sleep. Hence, experts suggest that one should not disturb any cat if lying in such a position.

7. The cat wants to stand up fast by folding her paws.

You must have noticed that animals sleep and sit in several positions like upright, with paws folded in or out, etc.

Ever wondered why? Let me tell you. It’s a formal study that animals like cats sit or lie in a folded position to get up fast and respond fast if needed.

It’s more like an attentive position for them as cats are hunters by instinct and lived in the forests before getting domesticated.

Another thing to note here is that if any situation arises which will require them to stand up fast, their folded position will boost their front body.

Last but not least, just like humans fold up their hands and legs owing to their habits, cats too fold up their paws as they are habitual to such behavior and actions.

So, these are the reasons why cats fold, cross, or curl up their paws.

Why do cats cross their front paws?

If your cat likes sitting close to you and resting her head on your lap, you’ll notice that she will gradually fold/cross her front legs.

While some cats will cross their legs upon resting on your lap, others may not feel the same. They might milk your knee or thigh to feel comfortable.

They will cross their front paws while they are alone and sitting on a chair.

Or if they are watching you doing the same as cats can pick actions very quickly. All in all, cats crossing their front paws is the same as they fold in their paws.

Your felines aren’t sending secret Morse code messages to one another when they lay with their paws crossed or tucked underneath their belly.

They’re merely searching for a comfortable situation to begin staying in bed for the following two hours. If you locate any more profound mysteries behind this position, make sure to tell others!