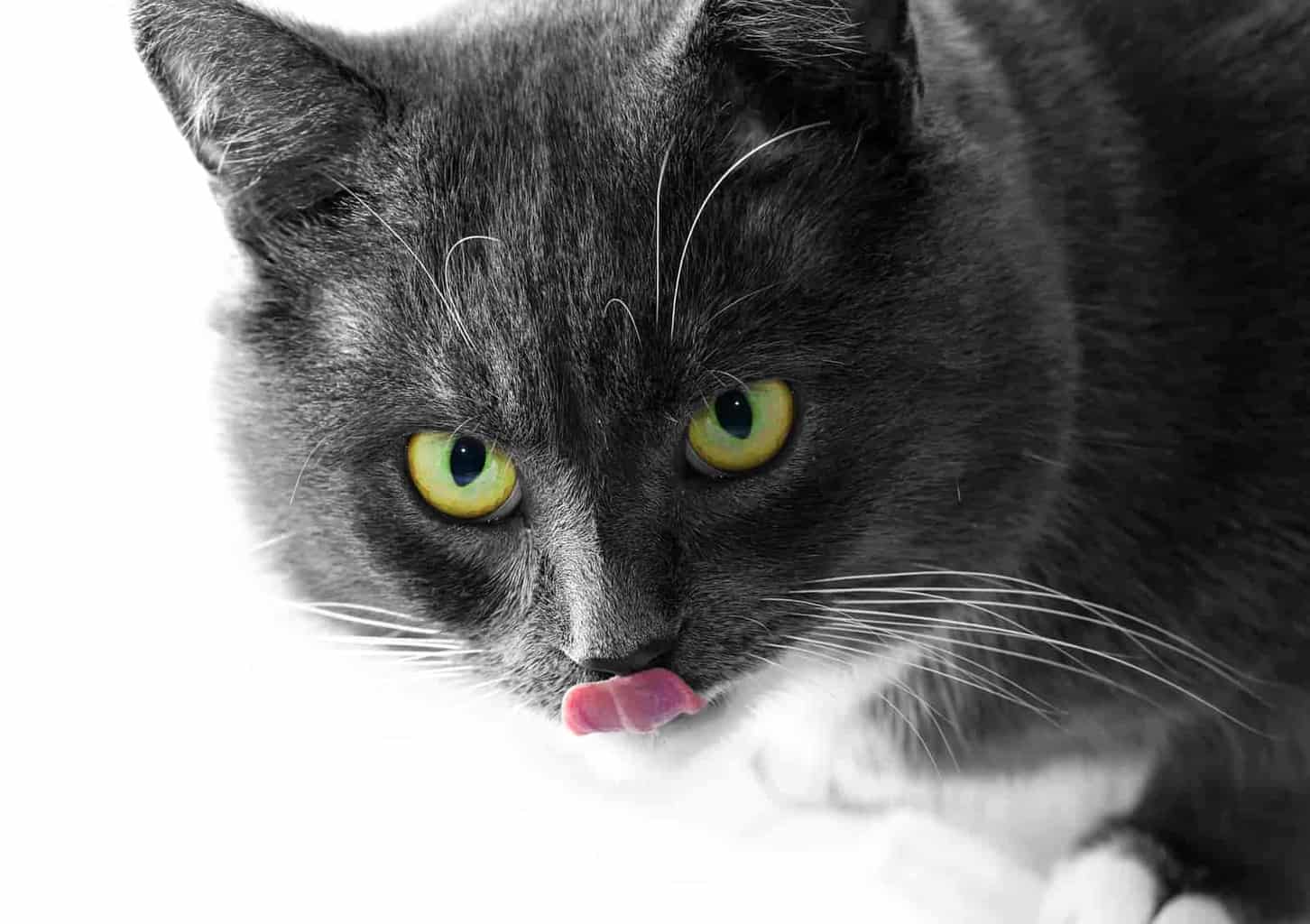 Does your cat constantly lick its lips and just won’t stop? You might have thought initially that it could have been a regular habit, but gradually the licking habit must have increased, and now your cat always has its tongue sticking out.

If you are worried about this, you need not be. It might have managed to sneak out a tasty treat, or simply like licking its lips without any reason, or there must be a point or two to dig into as to why your cat keeps on licking its lips.

What does it mean when a cat licks its lip?

When a cat licks its lips, it can mean that it has just finished eating, and now it is cleaning up itself by licking. Also, it might be possible to go through teething or some other tooth and gum problems.

It can also lick its lips to keep them wet and prevent the feeling of dryness. If you start noticing the pattern of overgrooming, you might consider visiting a professional cat behaviorist.

Do cats lick their lips when stressed?

Yes, cats do lick their lips when they are stressed or anxious. There are so many things that a cat does when it is stressed. They prance back and forth, they chew on things, and they keep on whining. But the most common and noticeable is the licking.

Cats often tend to overgroom themselves when they are stressed. However, cats lick to moisten their noses and explore the world around them, often portraying distress. Well, this licking is often misinterpreted.

If your cat has enough water to drink around itself and doesn’t have any irritation around its mouth or nose, then it is experiencing stress or anxiety for sure due to some reason, most possibly new changes in its environment.

If you notice something concerning, you must consider visiting the doctor as soon as possible and figure out the problem with your cat.

Why does your cat keep licking its lips?

Cats communicate in various ways; one of the most common is licking. Cats tend to explore the environment by licking around. So if a cat licks its lips, it is entirely normal.

Before we look into why a cat licks its lips, it is essential to know that a cat licking its lips is harmless and normal and is hardly a matter of concern. But sometimes, it can lead to further concerns.

When excessive saliva builds up inside a cat’s mouth, then this disorder is called ptyalism. It cannot handle the excessive saliva inside its mouth and hence star licking its lips. Ptyalism can increase over time, which can also be triggered by other health problems such as kidney disorders.

Ptyalism can also initiate nausea and vomiting. So if you can track all the symptoms leading to ptyalism, you might as well seek the recommendation of a vet and follow the medication suggested.

Cats are very particular about self-hygiene. So it is most likely to lick its lips to clean itself after a meal. But just in case you observe that they are constantly licking their lips if, without food, this is an indication that they are having tooth and gum problems.

Older cats are most likely to suffer from oral disease, but there is no specific age limit to why a cat might have tooth or gum problems. There are some reasons to ponder upon.

Excessive swallowing, drooling, and lip licking are involved when the cat is in great pain caused by the developing of ulcers. Ulcers are formed from dental diseases, oral infections, and other infections related to ingestion caused by caustic substances or kidney disease.

Irritation caused due to plaque or tartar inside the cat’s mouth can cause discomfort, which leads to excessive lip licking.

Plaque build-up starts as a thin layer developing over the teeth due to settling food particles, saliva, and bacteria. If plaque is not removed regularly, it gradually builds up to form hard tartar. This leads to constant licking of lips.

To avoid this situation, it is essential that a routine mouth cleanup of the cat is done to keep it from licking the lips.

If your cat is constantly licking their lips or mouth, then the reason behind this can be that your cat has a dry throat or mouth or it has dry hairballs stuck inside its throat. It is pretty common for cats to do so as they are very particular about their self-grooming.

The fur, dirt, and other particles up in the air also irritate the cat’s mouth and nose, and as a result, the cat starts licking itself. A cat is also found licking itself when it tries to prevent its nose and mouth dehydration.

A cat licking its lips might be nauseous due to various reasons. It can be hairballs, stress, medication, infection, food allergy, poisoning, etc. Other signs of nausea are drooling, heavy breathing, and restlessness.

In such a situation, consider taking your cat to the vet and following the recommended medication.

And upper respiratory infection generally refers to cold but sometimes can be more severe than just a common cold. It is commonly caused by bacteria or fungi and can elevate the licking of lips as the cat is irritated by the sore upper throat, running nose, and sinuses.

To protect your cat from this, try to keep it in an isolated area with no vectors of bacteria and fungus responsible for the infections. Then too, if the problem is not solved, you must consider taking the advice of a vet.

Cats can also have compulsive disorders

Like human beings, cats can also have obsessive-compulsive disorder (OCD). This might trigger the habit of repetitive actions without any purpose. In this case, your cat engages in licking its lip constantly to ensure grooming.

Some of the symptoms of obsessive-compulsive disorder are excessive grooming, sucking and chewing, pouncing on invisible prey, pacing, constant meowing, tail wagging, etc.

Tasting of a foreign body or a funny object

Cats are very inquisitive. They might lick off a new object to explore it. This way, they lick off the dirt or something unwanted. They can lick soap or detergent, or some chemicals. If they find something amusing, they continue to lick their lips. Also, it tries to get rid of anything they dislike.

Also, your cat might lick its lip if they find something funny. It keeps licking its lips to explore the object and won’t stop until it is done.

Nervousness, stress, anxiety, underconfidence, and other similar feelings trigger the habit of constant lip licking of a cat. Along with lip-licking, if your cat is showing a different body language, such as crouching or tail wrapped around itself, then it is inevitable that your cat is anxious.

Some of the reasons behind the anxiety can be routine changes, introduction to a new pet, change in owner, shifting to a new environment, moving home, separation from its owner, etc.

To prevent anxiety in your cat, you can try spending some time with your cat, learn about its problems, and then try to give it whatever is needed to calm the cat down.

Just like humans, cats too are also prone to many microorganisms in food or air, which might enter into their respiratory system if your cat is constantly licking their surroundings. This then triggers the constant licking of lips due to irritation or stress due to allergic reactions in their system.

Some common causes which lead to allergy in cats can be grass, which causes hay fever, pollen, dust particles in the air, dander, hairballs, some food particles, etc. if your cat is constantly licking its lips out of inflammation.

It is most likely to have breathing difficulties, skin irritation, or dermatitis.

To protect your cat from allergies, keep it away from all the possible causes.

Observe the patent of its food and the things that come in contact, and eliminate everything from its routine. You can do that by providing cat-friendly distractions like toys and games.

All you have to do is keep up with a good observation. Cleaning up after a meal, grooming is something your cat does daily. Also, an inquisitive cat keeps on licking to explore things around itself.