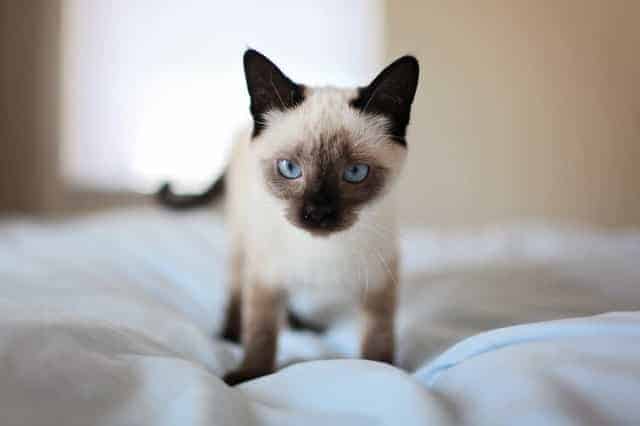 Originating from Thailand, Siamese cats are one of the most popular cat breeds in the world.

Their unique color and pattern combination and their kind and amicable behavior are responsible for their fame.

Many breeds have a similar pointed color pattern. It is important to generalize the discussion when we are talking about Seal Point and Chocolate Point.

Both of these color patterns are cumbersome to distinguish. They have similar colored backgrounds with almost identical pointed colors.

Hence, we sometimes fail to separate one from another. In this article, we are going to discuss the minute differences between seal point and chocolate point.

As we have already said, there aren’t many visual cues from which you can differentiate between a seal point and chocolate point.

A trained eye of a breeder can distinguish between a seal point and a chocolate point.

But, for regular cat owners, it can be a tough job.

Before going into the distinctions between these two pointed color patterns, let us look into the origin of these sharp color patterns and how chocolate points became different from seal points despite sharing many similarities.

All Siamese cats have pointed color patterns, but they also come into this world as albinos. The coloration of the pointed sections depends on the temperature of the skin.

When the temperature of the skin goes below 98-degree Fahrenheit, the coloration of the fur takes place. However, the color depends on genetic mutation.

When the cat is inside the womb, the temperature remains above that stipulated temperature, and that is why Siamese cats remain during birth.

The coldest parts of the body slowly start to take colors. The coloration takes place for a year after their birth, and it continues to darken as they grow up.

Experienced breeders can predict the color of the Siamese cats from the paw pads and nose leather. However, even the experienced may fail sometimes.

In the late 1800s, cat authorities worldwide used to consider chocolate pointed Siamese cats to be a genetic defect of Seal Point cats.

We will discuss these differences in the subsequent paragraphs, and you can see how strict the rules were back then.

Later, a group of Siamese cat enthusiasts dedicated their time to inbreed these discarded cats. From then on, the chocolate colorpoint became a color pattern for the Siamese cats.

However, it was not until the 1950s that the cat authorities started considering chocolate colorpoint as an official color for the Siamese cats.

The slight difference between the seal point and chocolate point engendered the chocolate colorpoint in the cat world.

Now that we know these two colorpoints’ historical significance, we can look into the differences between seal point and chocolate point.

We need to understand the fact that chocolate point developed as a genetic mutation from the seal points.

So, there are very slight differences between the pointed color patterns. Seal point Siamese cats have a changing base color.

When they are kittens, they have a pale-cream colored base color. But the coat becomes dark as they age.

However, a chocolate point Siamese cat has an ivory-white coat color, and it does not change throughout its lifetime.

It can also have a cinnamon tone to their coat color.

So, it is hard to distinguish between a chocolate point and seal point when they are kittens. The difference becomes more apparent when they grow up.

The difference between their pointed colors is hard to observe, but you can understand it closely. Chocolate point Siamese cats have a slight pink undertone to its brown color.

Whereas, seal point Siamese cats have a seal-brown shade with a cold undertone. In general, the tone of the seal point is darker than the chocolate point.

The coloration of the coat happens due to the presence of an enzyme that catalyzes that coloration. However, coloration can vary from one cat to another.

For example, the coloration rate of seal points is significantly faster than the chocolate points. The body color of chocolate points stays the same throughout its lifetime.

Seal points score points in terms of their purity and color scheme, but they lose points when they do not have an ivory coat. That is why you do not see many seal points in the cat shows after they are two years old.

Now, you should be confident about the differences between a seal point cat and a chocolate point cat. It may seem considerably easy on paper, but distinguishing between these two cats can be bewildering.

You can talk to the breeder about the cat’s actual coloration before adopting, but that can also be disappointing.

Seal point or chocolate point, you should love them the same as they will love you similarly.