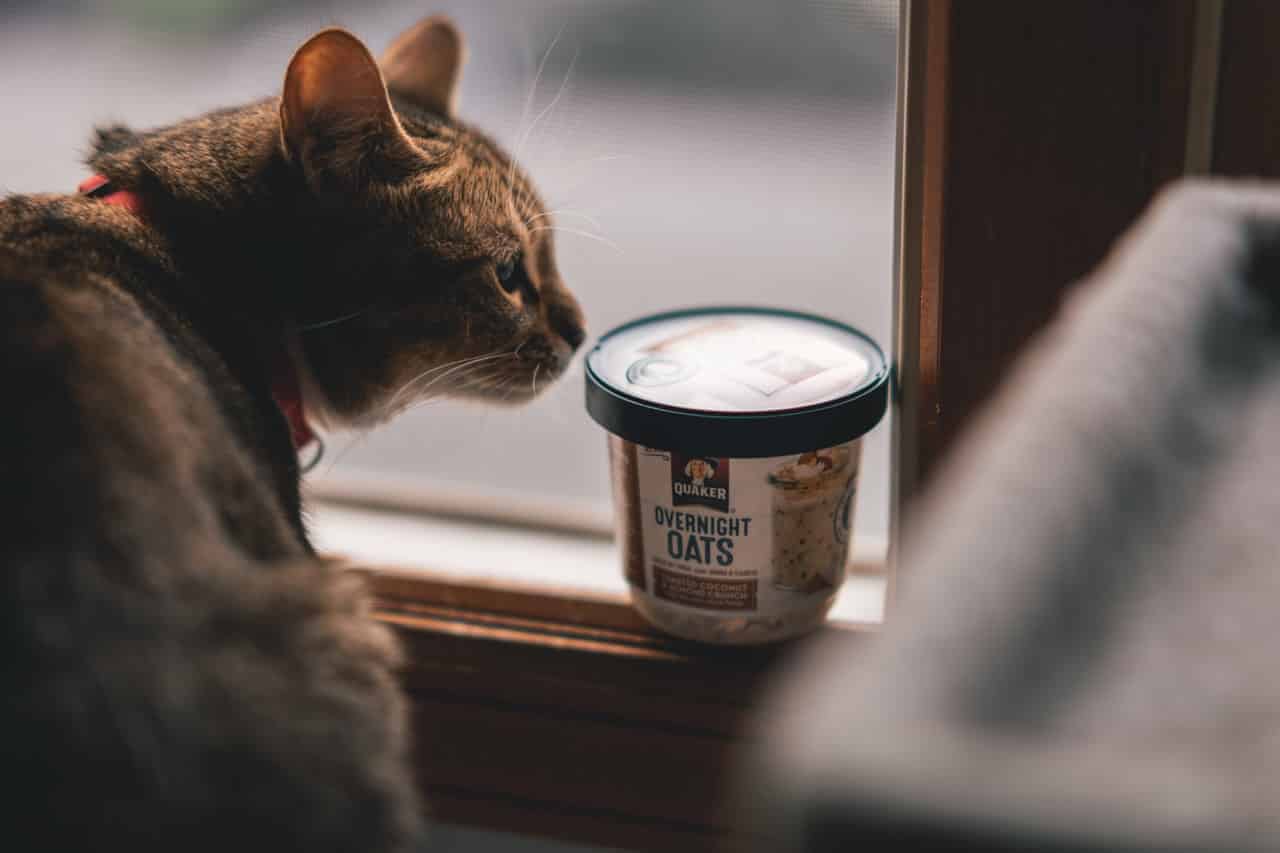 ​Are you curious about why your cat gags when he or she smells food? Well, Look no further because, in this article, I am going to explain the reason.

​As if a cat’s obsession with schedules and routine aren’t weird enough, another behavior they show that seem odd to humans is the way they communicate.

​Aside from chirping, meowing, and purring, cats also gags, chokes, and hacks to signal their cat owners of any distress they are experiencing.

A recent question was raised to me about a cat gagging when he smells food. There could be a lot of reasons. And, I wouldn’t blame the owner if the first instinct was to check with the vet.

​After all, that is always the first step when there are concerns about your pet.

But, if there aren’t any vets available in an emergency situation, here are a few things you may want to understand and do when your cat gags.

What This Article Covers:

1) Why Your Cat Gags When He Smells Food?

2) Is Your Cat Really Gagging?

5) Why do cats gag at the smell of cheese?

Why Cat Gagging At The Smell Of Food

Cat gagging could be a lot of things. But, if gagging you mean the cat opens his mouth, does a funny looking face, makes a bit of noise as she pulls air into her mouth as if tasting the air, then it is because of one thing;

Your cat considers the scent of the food, he breathes in the air and transfers it to a Jacobson’s organ or more commonly known as the vomeronasal sac. This is found just behind the teeth in the roof of your cat’s mouth.

That is one reason why your feline gags at the smell of the food. Or, it could also be that the scent is too unpleasant or unbearable for them.

​Cats hate anything that smells citrusy, you will notice them gag at the hint of it.

Is Your Cat Really Gagging?

​The physical posture of gagging in cats differs depending on the reason. Cats may be choking on food or exposure to something that is harmful or they may be trying to eject a hairball.

Gagging is one reflex that tells the feline it is time to vomit the unwanted fur masses within. This reflex can be long and dramatic.

​When cats try to eject a hairball, you will see them sitting low to the ground, neck extended with rolling movements with its throat. It looks natural and free of panic.

On the other hand, gagging because of an immediate cause, like a scent or undigested food will have your cat gagging look disorganized and hurried, accompanied by yowls, howls, cries, and disoriented moves.

Has The Cat’s Gagging Produced Anything?

A cat’s body will naturally reject anything that for them is unsavory or harmful, especially that their digestive system is hardworking and well-protected.

​Generally, when they gag, it is just their instinct to expel something within so that he can stay healthy and remain a top-notch survivalist.

Cats have an average smelling receptor of 45 to 80 million. While it is not close to dogs that reach up to a staggering 300 million, we still can’t deny the fact that cat sniff can go as far as a mile away.

​Therefore, even when the food he smells is not in front of him, he can still smell it and may gag at the hint of it.

So, if you are wondering why out of the blue the moggy suddenly gags, look around to see if there may be any food or type of smell that could have triggered it. Some of them are:

The strong scent that comes from citrus fruits like lemon, orange, or grapefruit may feel like an assault to your cat’s sensitive nose. Their peels and juice alone are potent deterrents to cats.

You may assume that cats like mint since they belong to the same family as catnips.

​In reality, they don’t like it at all. To kittens, they have a more pungent smell and they are deemed abrasive.

​You will notice them not just gagging but running and hiding in a corner until you have cleared away the smell.

Garden solutions like rosemary, cinnamon, and lavender are extremely abhorred by cats.

​You can instantly get a stink eye from your furball at the hint of these herbs’ smell.

​Not only does lavender deter cats, but they are also toxic to them and has been known to harm the liver and cause fatality.

Understanding Your Cat’s Hints for Normal Or Troublesome Gagging

Productive gagging, that was the cat’s gag actually produces vomit is informative and it allows the owner to look and understand (usually with disgust) what is going on with the cat.

​Basing on the amount of bile, hair, mucus, or blood, gagging and vomiting are the cat’s way of telling his owner something is wrong.

If along with the gagging are muffled or loud sounds that resonate distress, you may want to set an appointment with the vet as it is a clear red flag that points to a progressing pain.

​If it is an environmental concern your cat has, you may reach out to your pet behavioralist.

Otherwise, if there are no sounds and gagging looks like a normal reflex when the cat does it, chances are, he is only responding to a brief aggravation in his immediate environment. Nothing too concerning.

Foods that may make cats gags are Citrus, Cheese, Tomatoes or vinegar.

2) Why do cats gag at the smell of cheese?

Your cat might gag at the smell of cheese because of dislike. Some cats are friendly to cheese but not all of them are.

Just like humans, cats gag when something smells unpleasant or overpowering. With the sense of smell cats have and an organ that allows them to interpret smell, gagging is merely the cat’s reaction to whatever bad it is smelling – sometimes even food.

Then again, if gagging continues and produces something off, a call to the vet is more appropriate than wondering what is going on.

Learn How To Own & Raise A Cat Without Hassles: 50% Off