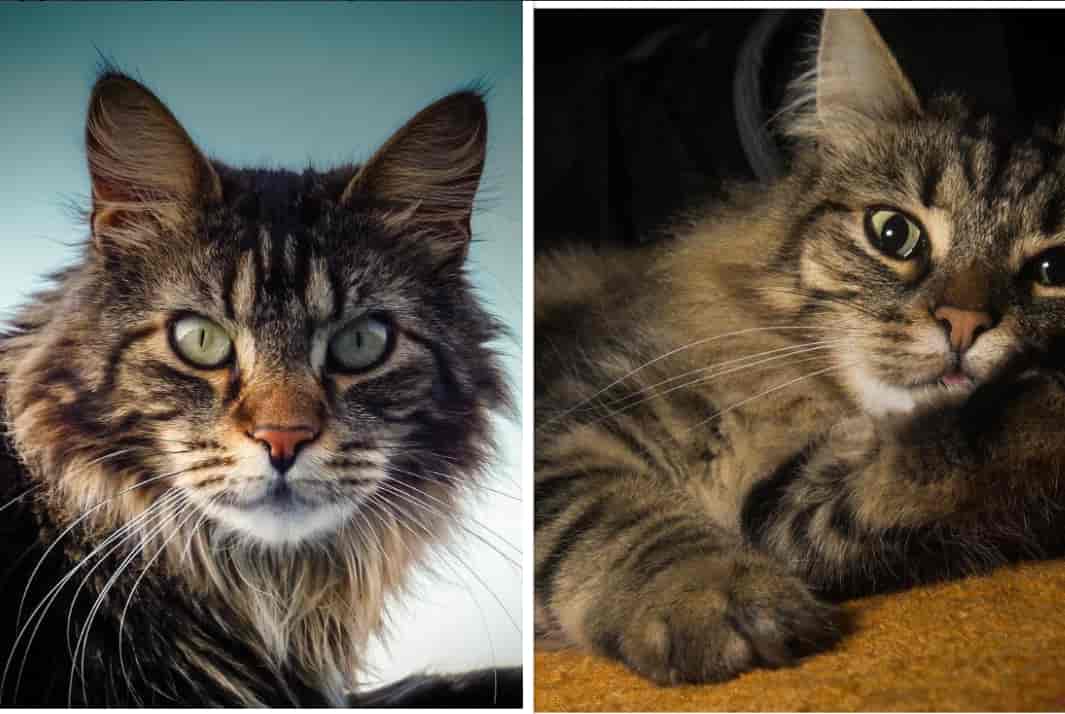 Maine Coon and Norwegian Forest Cats in the eyes of the novice seem totally the same.

Most get very confused since they are alike at first glance. Both arelarge breeds. Both have long silky coats. Both are well known for being outgoing and friendly.

Certainly, both breeds are wonders of nature. And, as hard pressing it is to distinguish a Maine Coon from a Norwegian Forest Cat, some differences set them apart.

If you are picking between these two plus-sized breeds and are having a hard time because they just appear to be very similar, read on to find out their dissimilarities.

From there, you will have several factors to compare and contrast the two of the fluffiest cat breeds there was.

What do Maine Coons and Norwegian Forest Cats Have in Common?

Before we proceed with the distinctions of the two furballs, let’s first pay attention to the factors that make people think they are the same.

Many believe that Maine Coons are descendants of Norwegian Forest cats. However, this is only based on the fact that they both grow to a large size as breed and have long and thick silky coats.

These coats are meant to keep them warm during harsh winters.

Both Coons and Wegies are social and friendly. They show great loyalty and they enjoy being around people especially around loving families.

The two are equally intelligent but, as mentioned, no matter how similar they seem to be, they are still two different breeds.

What Are the Differences?

In an overview, here is how you can differentiate the two based on their appearance.

Maine Coons and Norwegian Forest cats are fairly similar in terms of physical appearances. However, the personalities of these two cats can be quite different in a subtle way.

When it comes to the personality of any cat, we cannot predict it accurately beforehand. Every cat is entitled to its personality, and there could be aberrations in the same breed as well.

We also agree that there could be similar characteristics for a particular breed. So, we would consider the most common behavioral traits of the two breeds and compare them side by side.

Maine Coons are extremely demanding when it comes to the attention of their owners. Norwegian Forest cats do not require as much attention as the Maine Coons do.

Maine Coons are extremely loyal to anyone they see, and it is not hard to win their loyalty in general. However, the Norwegian Forest Cats are only receptive towards their humans.

Both are active and busy cats. That means, if you take home either one of them, you need to have plenty of suitable entertainment. Keep in mind that Wegies have strong claws and they love climbing.

Both Wegie and Coons are intelligent and highly trainable.

Both are particularly happy to walk on a leash and play fetch like dogs. Coons like to chat and are very vocal while Wegies are quiet but may sometimes purr loudly. Both are potentially affectionate.

Maine Coons are talkative, and Norwegian Forest Cats are much lazier. These cats will only communicate when they need something from you.

However, both of these cats are amazing with a family. If you have a small child at home, you can’t go for a better cat breed than these.

Here is a chart of all the differences and similarities between Maine Coon cats and Norwegian Forest Cats:

Lifespan figures for every cat breed aren’t always accurate. Basically, they are always dependent on how you take care of them.

Norwegian Forest Cats, on the other hand, are studied to have a 91% chance of making it to the 5th year and 62% of reaching 12.5 years.

Caring for Maine Coon cats involves buying high-quality dry food at all times. The food should contain high protein content, low amounts of fat and carbohydrates, and sufficient amounts of omega 3 and 6 fatty acids for the natural growth of Maine Coon cats and to maintain a healthy coat.

Norwegian Forest Cats also need high-quality food for their steady growth. The need for those two particular fatty acids is still there for Norwegian Forest cats as they have similar long hair on their body. Nutritionally balanced food is the perfect way to ensure the healthy growth of your cat.

Both of these cats are quite big. As a result, they require more water than other cat breeds. So, make sure that both of them have access to water sources at all times.

The needs of both cats are almost similar, considering they both have the same type of fur and coat.

Brushing twice a week with a well-made slicker brush is enough. If you aren’t too busy, you can do that at least once a day, to keep them from getting hairballs.

The following chart depicts the similarities in their caring regime:

You need to brush Maine Coon and Norwegian Forest Cats every day. As both of these cats have long hair, brushing has to be a part of the schedule. Both of these cats are very receptive to the daily brushing regime. However, they might resist brushing certain places on their bodies. Brushing the coat needs to be implemented in the day-to-day routine from the start.

There is also a need to trim the fur near their paws as it can grow and hinder your cat from walking. So, for both of these cats, the paw fur needs to be trimmed from time to time.

Bathing is the easiest job when it comes to Maine Coons and Norwegian Forest Cats. It is quite hard to believe if you had owned other cats previously, but it is a fact that these cats love water. As both of these cats have long hair, there is a risk of matted fur.

While it is easy to train both of them to take a nice bath, you need to invest in some good shampoos to wash them off.

Claw clipping is another essential job that needs to be a part of the grooming process as well. You might need to buy a special type of nail trimmer for the cats. But, it is important to trim their nails once every two weeks.

Both Wegies and Coons need a diet that is rich in animal sources of fats and proteins. But, be sure to keep an eye on their weight.

Since both are particularly large breeds, being overweight may cause them to strain on their joints that can develop into hip dysplasia. [1]

The following chart should give you a better understanding of their price difference.

Norwegian Forest Cats are larger than the other cat breeds that we know of, except Maine Coon cats. As these cats can grow as much as 20 inches in length, they can easily outshine most cat breeds. Let us compare the cat size with cat breeds to know the difference:

In some cases, of course, the size of a Norwegian Forest Cat can be more than a Maine Coon cat. However, that is not universally true.

As Maine Coon cats and Norwegian Forest Cats share so many behavioral traits, you will find an amazing lap cat in your Wegie. Their medium to large size makes them perfect for a lap cat.

Why Are Norwegian Forest Cats So Big?

As the name suggests, Norwegian Forest Cats belong to the Scandinavian part of Europe, where the temperature stays below the freezing point for most of the year.

As a result, they grew so much in size to hold more fat over their body. It serves as an insulating covering from the cold of nature. As a result, Norwegian Forest Cats never have a problem with playing around in the snow. Their unique fur also helps them to stay dry no matter how much they play through the snow.

Another theory suggests that the great Vikings used to keep these cats on their ships as a pest control. As they were unopposed in such an environment, they grew up to such an extent.

Coonie or Wegie, which is the better pet?

If you are looking to pet a big cat, both can pass. Their muscular body covered in fluff is unlike any other breeds. If this is the feature you like in a cat, then it is unlikely that another cat breed can compare.

However, in terms of good health and life expectancy, that of the Norwegian Forest Cat’s makes them unrivaled.

1. Blue Maine Coon Cats : Everything You Need To Know