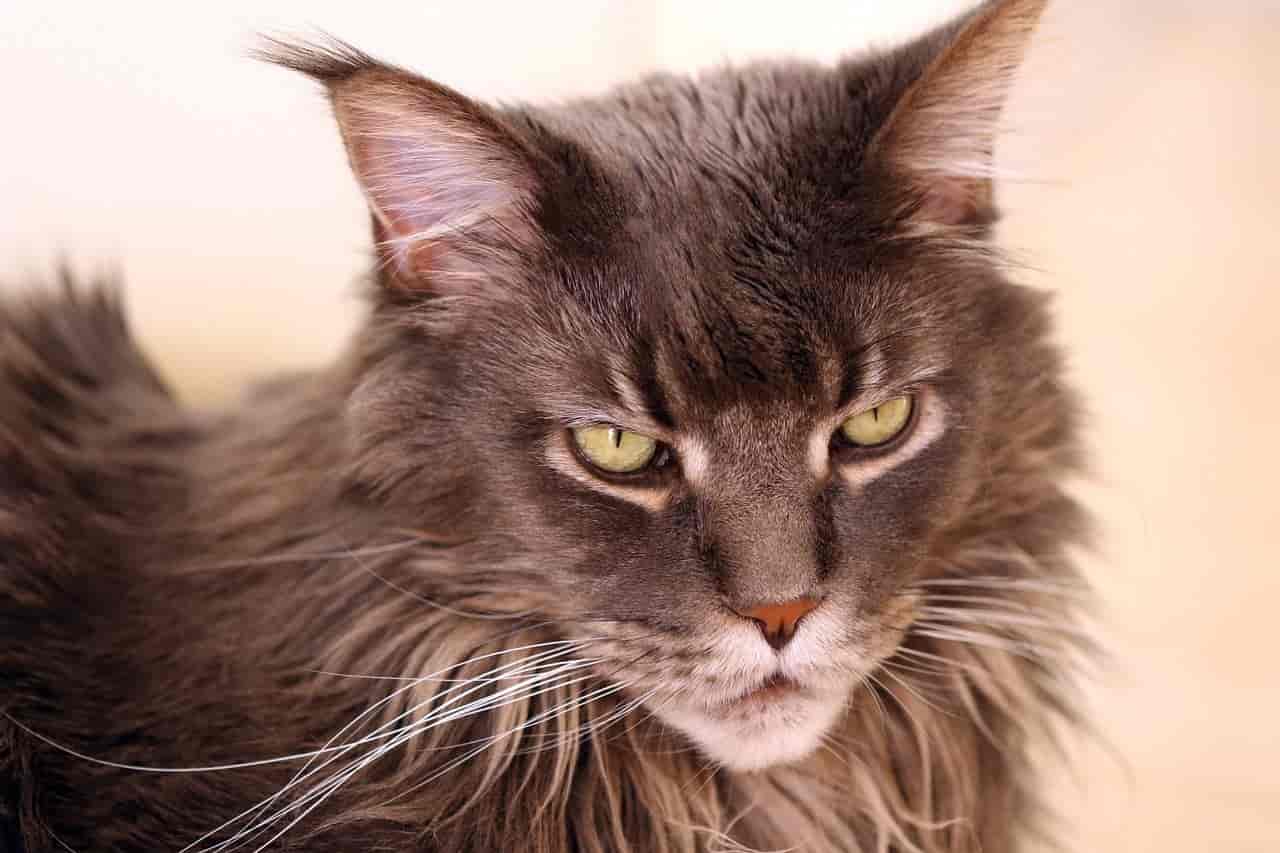 Maine Coons cats are one of the most popular cat breeds in the world. The oval eyes, lynx tips, triangular face structure, and pointed ears are some of the cat world’s most beautiful features.

However, another feature sets Maine Coon apart from all the other cats in the world. The sheer size of these cats not only makes other cats look like kittens, but they are also one of the largest domesticated cat breeds in the world.

If you have seen a Maine Coon, you would probably understand the immense size of these giants.

You might also be intrigued to know that many people call them the ‘gentle giants’ because of their kind and loving nature towards everyone.

So, you might be wondering how big these gentle giants are. This article will reflect on that aspect of this exciting breed.

You will know everything about the extent of growth and the growth process itself to understand these cats in a better way. Let us begin by explaining shortly about the Maine coon size.

How Big Can A Maine Coon Cat Get?

Maine Coon cats are one of the largest domesticated cats globally along with their long fur, and it has earned this fame for a reason.

They are almost the same size as any other kittens. However, Maine coon growth can surpass any cats in the world.

By the time they are 2-3 years old, they have already reached their maximum size, which dwarfs any other cats.

These cats’ average size can go up to 18 inches for males and 16 inches for females.

The weight of these cats can vary between males and females significantly. As you can guess, the numbers indicate the sheer size of these gentle giants.

Maine Coon cats stand out in the room very clearly. If you have one at your house, it will surely grab everyone’s attention because of this breed’s sheer size.

Even middle-aged cats can surpass most of the cats from different breeds.

If you are scratching your head for the numbers, the following table will surely quench that thirst. This table has given you the average height, length, and weight of male and female Maine Coon cats.

We will go over this difference in sizes in more detail in a subsequent section of the article.

So, we can recommend that if you are looking for a relatively smaller Maine Coon cat, you probably have to adopt a female Maine Coon cat.

The height and length of the Maine Coon cats can vary from one cat to another.

The above table also shows the sheer lengths of these cats. Most of the Maine Coon cats grow up to 40 inches in length, and some even go beyond that margin.

The world record of the longest cat in the world also belongs to a Maine Coon cat named Stewie.

Stewie was 48.5 inches long, and it had a tail having 16 inches in length. If this isn’t impressive enough for a cat breed, I don’t know what is.

Is There Any Size Difference Between Male and Female Maine Coon Cats?

Every cat owner who prefers large domestic cats should go with Maine Coons. Not only the size of the Maine Coons is impressive, but the kind behavior of these cats can also take anyone’s heart.

Although male Maine Coons are generally larger and heavier than female Maine Coon cats, several exceptions can prove you otherwise.

Hence, we do not have a concrete rule on the sizes of male and female Maine Coon cats, but you can expect a male to outgrow a female in terms of statistics.

The main difference between a male and a female Maine Coon cat is their behavioral characteristics, and we will not discuss them here. If you want a large domestic cat, there are no breeds better than the Maine Coons.

Why Do Maine Coons Are Bigger Compared to Normal Cats?

The striking difference between the sizes of Maine Coon and any other normal cat is quite apparent.

Before delving into the reasons behind this abnormally large size, we will give a fair comparison between an average regular house cat and a Maine Coon.

As you have a fair idea about the extent of height and length of Maine Coons, let us start by stating the average size of an average American cat. For example, an American shorthair cat’s average height is ten inches, whereas the Maine Coons stand at a sheer height of up to sixteen inches.

Although some cats’ weight can be more than a female’s, this magnificent breed beats everyone when it comes to length.

For example, an average American shorthair cat has a length of eighteen inches. A Maine Coon’s height can go as long as 40 inches, which is more than double an average cat.

So, it is safe to say that Maine Coons are unlike in many ways, and their enormous size is undoubtedly one of the unique characteristics.

By now, you should have a fair idea about the difference in size between a Maine Coon and any other cat.

It is tough to have a reason behind such a massive size of Maine Coon cats. However, there are several folklore and myths regarding the origin of these cats.

You might be happy to associate these interesting myths with your pet. In the pool of so many folklores, only a few have withstood the test of time.

Here, we will explore three such fascinating stories that could somehow explain the large size of Maine Coon cats.

Probably the best fascinating story amongst the three, this story has an impressive backdrop.

Marie Antoinette, the queen of France at the French Revolution, and her love for the six Turkish Angora cats are famous.

During the revolutionary time, she decided to flee the country with the help of Captain Samuel Clough.

Although cats were not allowed on the ship back in the days, the ship captain agreed to her pleadings as she would have ditched the idea of leaving otherwise.

However, just a few days before her departure, the queen was captured and killed. She never got to be with her cats, but the queen got her final wish through the cat shipment to America.

It is a widespread belief that the captain withheld his end of the bargain and brought the cats to Wiscasset, Maine.

Many people say that these cats mated in the wild and gave rise to the breed, which we most commonly know as Maine Coon. This story is not only fascinating, but it also gives a royal touch to the Maine Coons.

It is probably not a fascinating story about the origin of this cat. However, it is undoubtedly one of the most popular ones.

Many believe that the cat breed came from a cross between a raccoon and a semi-wild domestic cat. A lot of uncanny similarities between these two species also prove this exciting aspect.

Both raccoons and Maine Coon have bushy tails with dark-colored rings on them. Even their paws have the same semi-prehensile characteristics.

The most common similarity is that they are both of similar size. Hence, both are comparatively large. They both can climb trees using their specially-abled claws.

Although scientists have proved that the cross between a raccoon and a cat is not possible, we can always think that there is some mythical connection.

Vikings’ story is fascinating to itself, but when you realize that they could also be the reason for the cat breed we love and care about, it makes up for a brilliant story.

It is a widespread belief that Vikings used to keep cats on their ships to keep the rats at bay.

These sea travelers generally used to keep Norwegian forest cats for this purpose, and we all know about the similarities between Maine Coon and these cats.

There is proof that the long haired cat like Norwegian forest cats is the most similar to Maine Coons. As Vikings used to go on voyages for long durations, some cats may even reach the American shores and rise to the Maine Coons.

While it is probably a very far-fetched deduction, the similarities between these two breeds can always intrigue us to make this conclusion.

A reputable breeder will always provide enough food and care while they breed. That’s because it’s necessary for them to survive. A Large cat like maine coon needs nutrients like protein, Carbohydrates, etc just like we do.

If a breeder doesn’t follow a proper diet, chances are the cat will face some developing conditions like arthritis, hip dysplasia.

In order to minimize the risk, they provide plenty of food to keep them healthy and big. The same goes with the owner as well after they were brought from a maine coon breeder.

How Fast Can Maine Coons Grow?

Maine Coon cats go through several phases of growth, and it is not like any other domestic cats in the world.

While most of the cats stop growing after two years, Maine Coons keep growing till they are 3-5 years old. If we have to give a rough timeline of their growth, it would be like this:

At What Age Is A Maine Coon Full Grown?

As we have stated in the previous section, on average Maine Coon becomes fully grown when they are 3-5 years old.

However, this timeline may vary from one cat to another. But a purebred Maine Coon cat will keep growing until they are five years old. The period might be less for mixed breed Maine Coons.

When do maine coons stop growing?

Maine coons can stop growing at the age of 3. But they can still keep growing till they are at age 5. After that, the growth will stop.

What is the average maine coon height?

Most of the purebred Savannah cats in the world will hardly be fifth or sixth generation from the first of its kind.

While you have a good idea about the size of a Maine Coon by now, Savannah cats do not fall behind by far.

The slender look of Savannah cats may give you the wrong impression that they are more prominent.

However, Savannah cats have an average weight of around 13 pounds. So, they fall short by a little from the male cat, and they are comparable to an average female Maine Coon cat.

Maine Coon cats can attract anyone’s attention because of their extreme size. They are also bigger than many dog breeds.

So, if you have not seen a Maine Coon, you are probably missing out on sight to watch. On the bright side, they are also incredibly friendly and playful.