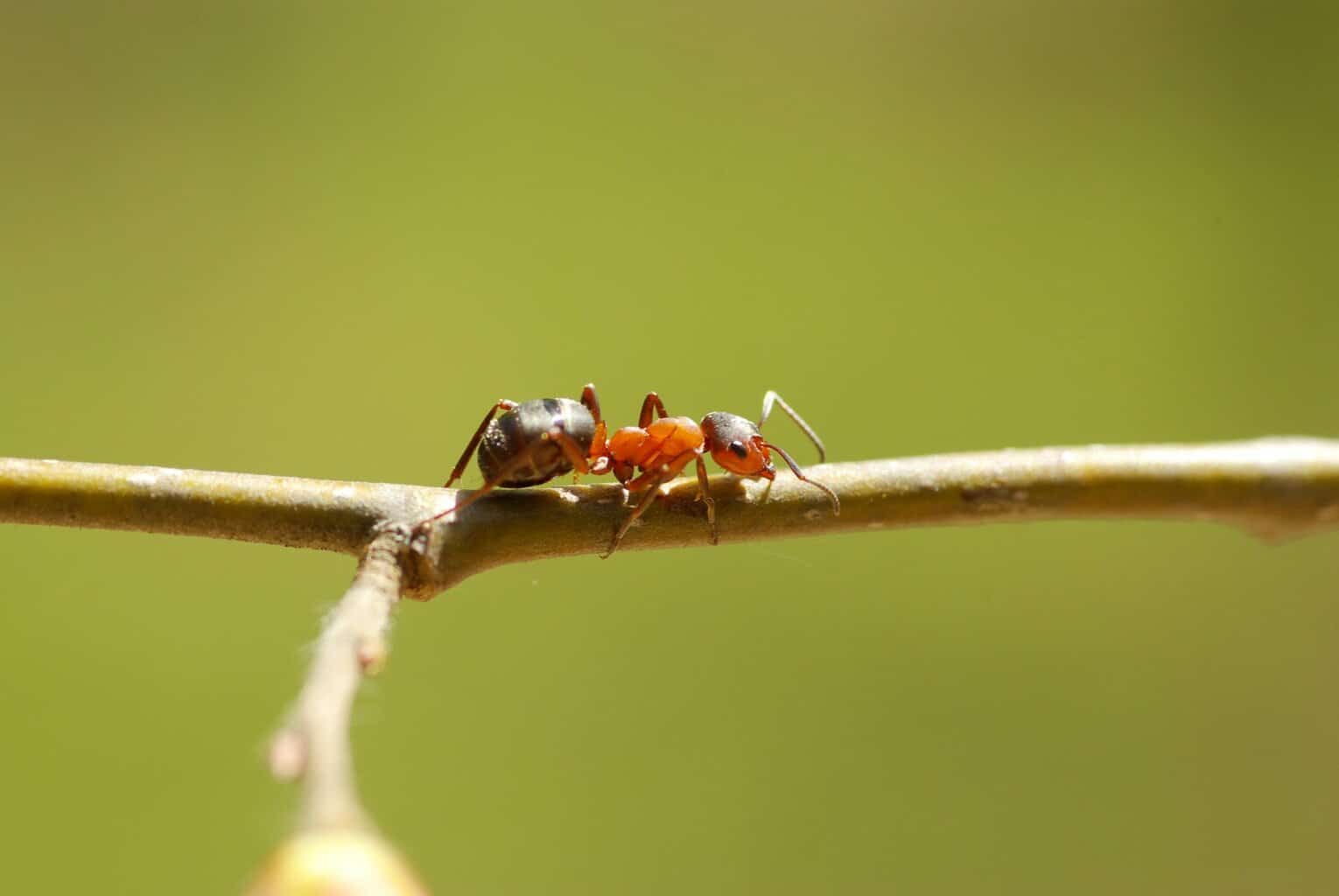 Ants never have bones like other animals or human beings. Instead, they have an exoskeleton, acting as a framework for the rest of their body.

Ants, as with all other types of invertebrates, lack both bones and a backbone in their bodies. Instead, they have a chitinous exoskeleton that protects them from the environment.

Chitin is a biopolymer that occurs in its natural state. In this post, we will go through more about the ant’s body construction, specifically its exoskeleton, how it functions, and the need for ants.

Does Ant have a Backbone?

Ants do not have bones or internal skeletons like human beings and other animals. Due to the absence of a backbone in their bodies, ants are invertebrates.

In other words, ants do not possess an endoskeleton but rather an exoskeleton. Ants have what’s known as an exoskeleton, meaning their skeleton is present on the outside of their bodies.

Do ants have their skeleton outside?

Ants do not possess an internal skeleton. They do not have live skeletons but have non-living exoskeletons positioned on the exterior of their bodies.

This exoskeleton covers the ant’s internal organs, keeps the ant from drying up, connects to the ant’s muscles, and enables the ant to acquire information about its surrounding environment. Considering these exoskeleton advantages, it becomes easier to see why an ant has a skeleton outside the body.

The exoskeletons of ants serve as a kind of defense against predators. This tough outside coating is a barrier, preventing unwarranted access to the more delicate inside organs.

Ants have an epidermal layer under their exoskeletons. On the other hand, the exoskeleton acts as armor covering the epidermis, protecting both the skin and the internal organs.

In addition, the exoskeleton can effectively ward off biological threats like parasites, fungus, viruses, and others, ensuring the safety and wellbeing of the ant.

In addition, the exoskeleton is where the pigments are created responsible for the color patterns seen on ants. These color patterns help to deter prospective predators.

The three layers of an ant’s exoskeleton are the endocuticle, the exocuticle, and the epicuticle. Exoskeletons are produced from the epidermis. The epicuticle is the last layer and a protective barrier against water.

The fundamental function of the epicuticle is to assist the ant in retaining its water, preventing it from drying up. In addition, the epicuticle prevents water from entering the body of the ant, which would otherwise cause it to drown.

These accomplishments are made possible by a layer of waxy molecules that are contained inside this layer and create a barrier impermeable to water. Chitin is a carbohydrate component used in the construction of the exoskeleton. It also ensures that the exoskeleton does not dry up on its own.

Ants have muscles integrally connected to their exoskeletons. The muscular movement of the ant causes the connecting exoskeleton plate to move as well.

It is because the exoskeleton is not a single surface but rather comprises many plates that are jointed together. Ants can move around due to the movement of their muscles and plates. Because of this mechanism, the muscles of ants have almost endless space, enabling them to move in a more diverse range of ways.

Mechanoreceptors, chemoreceptors, and photoreceptors are the three sensory receptors ants use to acquire information about their surroundings. The exoskeleton of the ant is often where the first two different receptors are present.

Mechanoreceptors are sensitive to motion and can determine where an ant is present in its environment. For instance, the campaniform sensilla are receptors in the exoskeleton sensing when it is bending.

Exoskeleton: What is it?

A creature’s tough outer shell is known as an exoskeleton. The exoskeleton can move in various ways due to flexible joints and underlying muscles. An endoskeleton is a sort of skeleton that ants have.

In contrast to external soft tissues, internal sturdy structures are present on top of and between the exterior soft tissues. One interesting fact about an exoskeleton is that it is a non-living structure formed from calcium carbonate and chitin.

Let us now check out the advantages of the exoskeleton.

1. The jointed appendages of an exoskeleton allow for sophisticated motions

Some creatures’ thick outer shell is known as their exoskeleton. Flexible joints in the creature’s underlying muscles are common in this protective covering construction.

As a result, the animal may perform a wider range of emotions than is possible with the endoskeletons of other animals. Animals with this trait include grasshoppers, scorpions, ants, and shrimp.

Most insects’ exoskeletons are segmented, and each body component gets protected by a distinct piece. Due to this design, ants can move their head and body independently.

2. It shields an animal from harm or abrasion

An animal’s muscles and interior soft organs are exceptionally well-protected by its exoskeleton. Soft tissue injuries are more likely to affect creatures without this armor.

The ants may use bone and other components to create this protective layer. Because of this, the animal is unconstrained in its movements within its natural environment.

3. The animal has more leverage because of its structure

There are often numerous layers to an exoskeleton. A hard outer and a flexible inner layer work together to protect the ants from predators. A waxy covering on the innermost layer protects the animal from dehydration.

Arthropods have a second layer that protects the first from injury. The animal has a lot of leverage because of its structure. It may utilize the outer shell as a shield, weapon, or tool to make life more pleasant in several ways. It can regulate its environment.

4. Exoskeletons protect the wearer from becoming overly wet or dehydrated

The animal’s body is supported similarly to a portable raincoat due to the strong coating on the exterior of this structure.

Its flexible inner layers will keep the creature from drying out while preventing it from being too wet to operate. Because of this, there is a built-in layer of protection against extreme temperatures. It helps in a great way to stay alive.

5. Hydrostatic skeletons are no longer required

Exoskeleton structures allow a wide range of body plans to evolve. As a result, this structure is the most effective one presently known to biologists since it enables animals to adapt to changing circumstances. We know at least some of the first species to utilize it, and nature continues to employ it in abundance.

Now it is time to check out the drawbacks of an exoskeleton.

For one thing, exoskeletons do not extend or contract

An exoskeleton cannot sustain the same level of trauma that a soft tissue outer layer can handle. If an impact is significant enough, animals in the last molting stages might be in danger of death.

With this natural structure, the healing time is longer if a break or damage does develop. Because of this, if a fissure develops, it may never heal at all. It can jeopardize the animal’s life if this issue is not addressed. The molting process is the sole means to restore this exterior structure once it gets destroyed.

Having a good sense of their surroundings might be difficult because of the animal’s exoskeleton’s thick outer covering. Pressure or massive impacts are the only sensations they feel in this structure. Because the harmful conditions are above the creature’s defensive traits, they may be in danger without realizing it.

Breathing might get disrupted if there aren’t any adjustments made

In environments with high amounts of moisture, this disadvantage is exacerbated. There can be health issues with this condition that are serious enough to endanger the creature’s life if natural procedures are not launched to correct the situation.

An exoskeleton has an impact on growth.

An animal’s exoskeleton is a big part of its body that will be difficult to handle if it becomes too enormous. As a result, most animals with this defense are tiny in stature and size.

It would be almost hard for a giant animal to move if it had an equal protective covering. Ants and beetles are the most common examples in nature since they do not have the same size limits as bears or tigers.

Exoskeletons safeguard ants from predators by providing them with a vital degree of protection. Due to its specific nature during molting, it is something to deal with in most cases. An exoskeleton has many benefits and drawbacks, making it transparent why it’s such a dynamic evolutionary component. Predators are out of their misery and a host of other advantages that typically exceed the drawbacks.