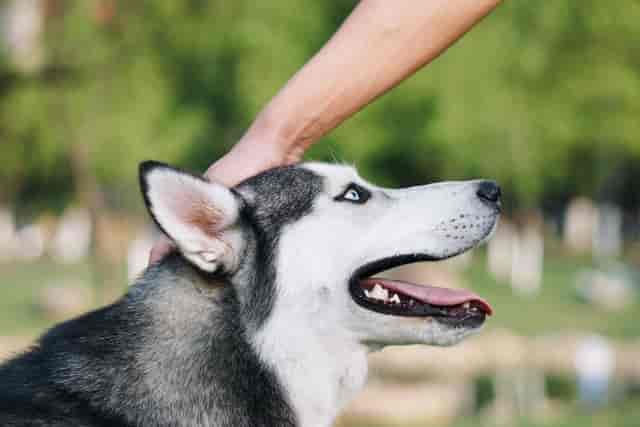 However, owning a Husky can be quite a handful for any owner. Huskies have a powerful personality, and they like to follow their own heart for everything.

We have all seen a Husky howl incessantly in a video, but how much do they bark? Knowing this information will help while you are adopting a Husky.

Do Huskies Bark A Lot? Huskies rarely bark if they are not inviting you or other dogs to play.

But that does not mean that Huskies don’t make any noise at all. Huskies are more known to howl or make “woo” whenever they are excited. And they are often excited.

In this article, we are going to analyze this behavior in more detail. You will know everything about the barking and howling behavior, and they can communicate with you.

Do Huskies Bark A Lot?

No. Huskies do not bark a lot. Huskies don’t bark unless they are communicating with other dogs regarding territorial matters. As Huskies are not territorial at all, you will find the huskies bark on rare occasions. However, they can bark and howl while playing or doing some physical activities.

Huskies are not the quiet kind of dogs. Huskies let their funky presence known with their constant howls and “woo”s. So, if you ask me whether they bark or not? I would say the negative. But I cannot deem them as silent as well.

The primary reason why Huskies don’t bark often lies in their origin.

Although they have developed a lot since their first appearance, and the environment has also changed from their actual origin, they still follow similar behaviors as their ancestors.

To understand this chain of reasoning, we might take the example of a more known species.

We have all seen german shepherds at one point. They are an extremely famous breed because of their protective nature.

If you look at the origin of this breed, they were guard dogs. Their intelligence and loyalty are unparalleled in the dog world, and they soon became a part of the police force.

So, they needed to be territorial and fierce in their appearance.

German Shepherds are known for their loud barking because they had to scare the perpetrators away using it. Hence, the German shepherds we see have similar behavior despite them not being part of the police.

We can also follow a similar logic for the Huskies. As you probably know, Huskies originated in the Siberian parts, where the indigenous people used to have huskies pull carriages across the frosty land.

You can understand that the Huskies lived in a civilized society and never had to fight or struggle for their survival.

As a result, they never had to bark at other dogs. Huskies still do not have that requirement to bark unless they are aggressive or communicating with other dogs.

Another reason that often makes dogs bark is their territorial matters. Generally, dogs are territorial, and they go to such extents to protect their parts.

They often scare other dogs with their barking.

However, Huskies do not show such territorial behavior. They never learned to be territorial because of their history of being sled dogs. It is another reason why we do not see Huskies bark.

These might give you enough justifications for this behavior. However, you can still observe them bark at other dogs or you.

As you might expect, it is absurd for their behavior, and there must be something wrong with the Husky that it is behaving in such a manner.

We will explore the actual reasons later in this article. But this section should give you a different view of your Husky and why they are different from other dogs.

How Often Do Huskies Bark?

There is no way to quantify the number of times you can see your Huskies bark. Ideally, they should not bark at all. They never got the need to bark at other Huskies to communicate.

If you observe them bark, you have to find the cause behind this behavior. It only means that they are showing out-of-norm traits.

So, it will be better for both you and your Husky to take away the reasons that can cause it. We will explore this in more detail in the next section.

What Does It Mean When A Husky Barks?

Knowing the possible reasons for the barking can help you reduce it. So, you must know why they might behave in this manner.

There can be several plausible reasons behind a Husky’s barking, and you might need to know all of them to determine the actual cause.

In this section, we are going to explain all the reasons for this behavior. You don’t need to worry as we have your back and provide you with all the necessary information you might need in this scenario.

What Does It Mean When A Husky Barks?

It is unnatural for the Huskies to bark, and you have to be observant when the Huskies are barking at your presence.

There can be several reasons why they can start to bark out of nowhere. We will discuss them with enough detailing so that you can decipher it yourself when your husky barks next time.

Although we have said that the Huskies are not territorial in the last sections, you can observe your Husky show aggressive behavior when there is an unknown person at the door or when you are in a park, and other dogs are also present there.

Generally, trained Huskies do not have a problem with others in their surroundings, but still, they can become a little territorial or protective.

You can determine whether it is the cause by noticing their barking behavior. Most of the time, the Husky will bark in a specific direction if bothered by any presence.

Huskies are highly active dogs, and they can do anything to have a fun session with you. They love to go out on walks and have extensive training sessions with you.

So, the Husky may be barking in excitement.

It is probably their way of showing that they love doing something different from their average idle time. Hence, they are barking instead of howling, which is their natural method of communication.

There is a simple way of determining whether it is the reason behind your Husky barking. Suppose you observe that the Husky is barking when you are coming back to the house.

In that case, you are picking up the lease, or when you are opening the door, then it is probably the anticipation or excitement making your husky behave differently.

Age is also a factor that you should consider when observing unnatural behavior from your young Husky. It is relatively easy to say that the young Huskies bark more than the adult ones.

Although the Husky is young and should accept its mistakes, you have to make sure that it does not stick to this behavior.

You have to train them with positive reinforcements so that they do not bark when they grow up. A properly trained Husky will help you maintain the much-needed decorum in the house.

Barking can also be a signal for you to understand that your Husky is not comfortable with something.

Generally, they want to let you know that they do not like where it is or whether it is fearful of something.

If you observe that the Husky is barking before going to a particular place like a veterinarian or a friend’s house, it is probably scared of that place.

Huskies love the company of their humans, and keeping them away from you can cause severe separation anxiety in them.

It is a difficult situation for any dog owner, and you have to make sure that you spend enough time with the dog. Observing clingy behavior in your husky may indicate that your Husky is suffering from separation anxiety.

Hunger can also be a trigger for their barking behavior. Generally, the Husky starts to bark near their feeding time to let you know that it is hungry. Make sure that you wait for it to stop before you give them food.

Many husky owners have reported that Huskies often bark when they are injured. You have to make sure that the Husky is having no symptoms to rule out this possibility.

Barking might be a common communication technique for almost all dogs; it is not the case for Huskies. If your Husky is barking, you have to guess that something makes it bark instead of howling.

We have covered all possible reasons so that you can get rid of the cause as soon as possible. Huskies are a fantastic breed, and making sure that it is okay would be your biggest task.