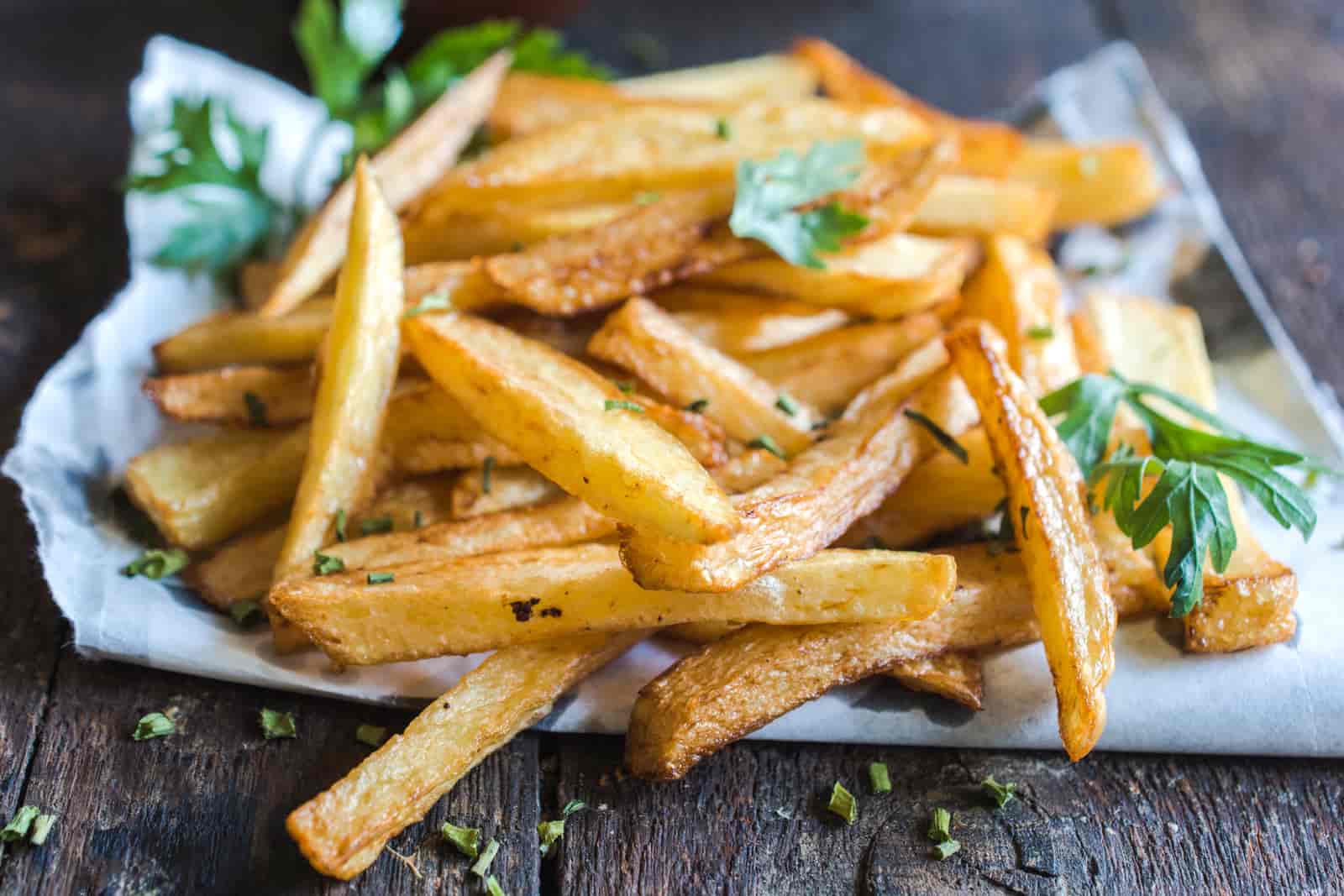 Cats often tend to sneak a few snacks from your plate for themselves. While this innocent practice is cute, it might raise a few questions. It is also possible that your cat is sneaking into the kitchen and trying to eat something from the counter. So, you may ask whether it is safe for them to eat french fries.

The answer depends on the french fry itself. Is your cat trying to eat some uncooked french fries from the kitchen counter? Then it is a definite no.

It is mostly okay if your cat is trying to drag a few cooked french fries from your plate.

However, it does not help them in any particular way. So, it is best if you can avoid this practice as well.

In this article, we will talk about everything that you need to know about cats and the effects of french fries on them. I know you might be interested to know the implications of this innocent act on your cat’s health.

French fries are not even healthy for humans. So, do you think that it is healthy for the cat? The answer is, of course, no. French fries do not have many useful nutrients for cats.

In short, you should avoid feeding french fries to your cat. If they ingest minute amounts, then it should not cause any problem. But, large quantities can be harmful to them.

We love french fries for the crispy crust over the soft potatoes and the tinge of salt that makes it amazing. However, cats cannot perceive so much taste as they have fewer taste buds on their tongues.

Although a small amount is not toxic to cats, we should avoid this scenario entirely for a few reasons. The following points should give you an idea of why cats should not eat french fries.

Potatoes are essentially carbohydrates, and whenever a cat ingests even a single french fry, it crosses its daily limit of having carbohydrates.

It might seem okay to you, but the extra carbohydrate takes the place of other necessary nutrients, like proteins.

Veterinarians recommend that carbohydrates should only constitute about one to two percent of the cat’s daily meals.

Hence, you can understand that the room for carbohydrates is really small, and a french fry does not fit into the diet.

As potatoes contain a higher carbohydrate (starch) form, cats cannot break it down into consumable parts.

So, most of the french fry goes through their body unprocessed. It is a huge problem as it essentially starves your little feline even though they are eating.

French fries have another element in abundance, and that is sodium.

It is in the form of table salt, and we all know that we dip french fries in brine before frying for a crispy crust. So, it is full of sodium, which is not even healthy for humans.

If you have ever visited a doctor for high blood pressure, you might have heard that sodium is extremely bad in these conditions.

It can raise the blood pressure to alarming levels and can cause cardiac arrest in extreme cases. So, it is best to stay clear of high sodium food elements.

If the effects can be this bad for humans, we can only imagine what it can do to small felines.

There is proof that the effects are direr for cats. As salt is the most abundant source of sodium, 4 grams of salt is lethal for cats. And it is not that much. So, it is best if you do not let your cat have french fries at all.

Fats are an essential part of a cat’s diet. However, the type of fat on a french fry is not suitable for cats.

Cats need a specific set of phospholipids (fat) for their growth and living. They cannot find these essential fatty acids in a french fry.

These fries have a high amount of saturated fat, and they can cause obesity for humans and cats alike.

According to a study, almost 50% of cats in America suffer from obesity. The effect is much worse for cats due to their small size. It can cause heart problems, joint problems, and many other associated illnesses.

Potato skin is probably the most desirable part of french fries. However, these parts are the most harmful to a cat.

As we have said, potatoes are kept in brine for a long duration before being deep-fried. So, it has the highest concentration of sodium, and it is extremely harmful to cats.

Ketchup is also a common side when you have french fries. It is probably the worst combination of harmful ingredients for cats.

Ketchup has a substantial amount of sodium, onion, tomatoes, and many other ingredients.

Onions are extremely poisonous for cats, and they can harm your cat whether it is cooked or raw. So, it would help if you never kept tomato ketchup lying around near a cat. The effects can be drastic.

French fries are not toxic to cats. So, it will not kill a cat if the cat has ingested a minute amount of french fry. However, it can lead to vomiting or other dietary problems.

The above holds if the cat has ingested minute amounts of french fries.

If the cat eats more and the sodium content reaches too high, you should contact the vet as soon as possible. The cat can have sodium poisoning, or it can lead to potential problems in the future.

There is another part that we often do not consider. Many people like to cook french fries at home. However, those individuals need to keep one thing in mind.

It would help if you never kept raw potatoes out in the open where the cat can reach, which is almost everywhere.

Raw potatoes have a compound called glycoalkaloid solanine, which is extremely lethal to cats. Potato peels also have these compounds in abundance. So, you have to keep these two covered or disposed of as soon as possible till you use them.

Can Cats Have McDonald’s, French Fries?

You should keep french fries away from cats because of the reasons we have stated previously.

So, the brand does not matter in this case. If you want your cat to have a healthy life as we all want, we would recommend that you keep your cat away from french fries.

We all know how nagging cats can become when you bring human food in front of them. However, most of them are harmful to cats. As a result, it is best to be careful when you bring french fries near a cat.

Can Cats Have Salted Fries?

When it comes to other kinds of fries, it is best to keep those to yourself and not share them with your cat. Salted fries always have a high amount of sodium in them.

Although it is an essential element in a cat’s diet, it should not have it in higher doses.

High amounts of sodium in blood lead to high pressure in humans and cats alike. It can often lead to cardiac arrest as the cat’s size is too small to control such an abundance of sodium.

What To Do If Your Cat Just Eats Fries?

First of all, fries should never be the source of nutrients, as it has none. At least not the ones cats need for a healthy life.

The best way is to give them high protein, vet-recommended food. In this way, the cat will have a much more desired diet and lead a happy and healthy life.

If your cat ate a french fry, it might not be a frightening situation. However, cats should never have it in large quantities.

So, the decision is as clear as it gets. It would help if you never let a cat eat french fries. You can think of one thing. Does it help your cat at all to eat a french fry? Because it is proof that french fries do more damage than they help if they help at all.