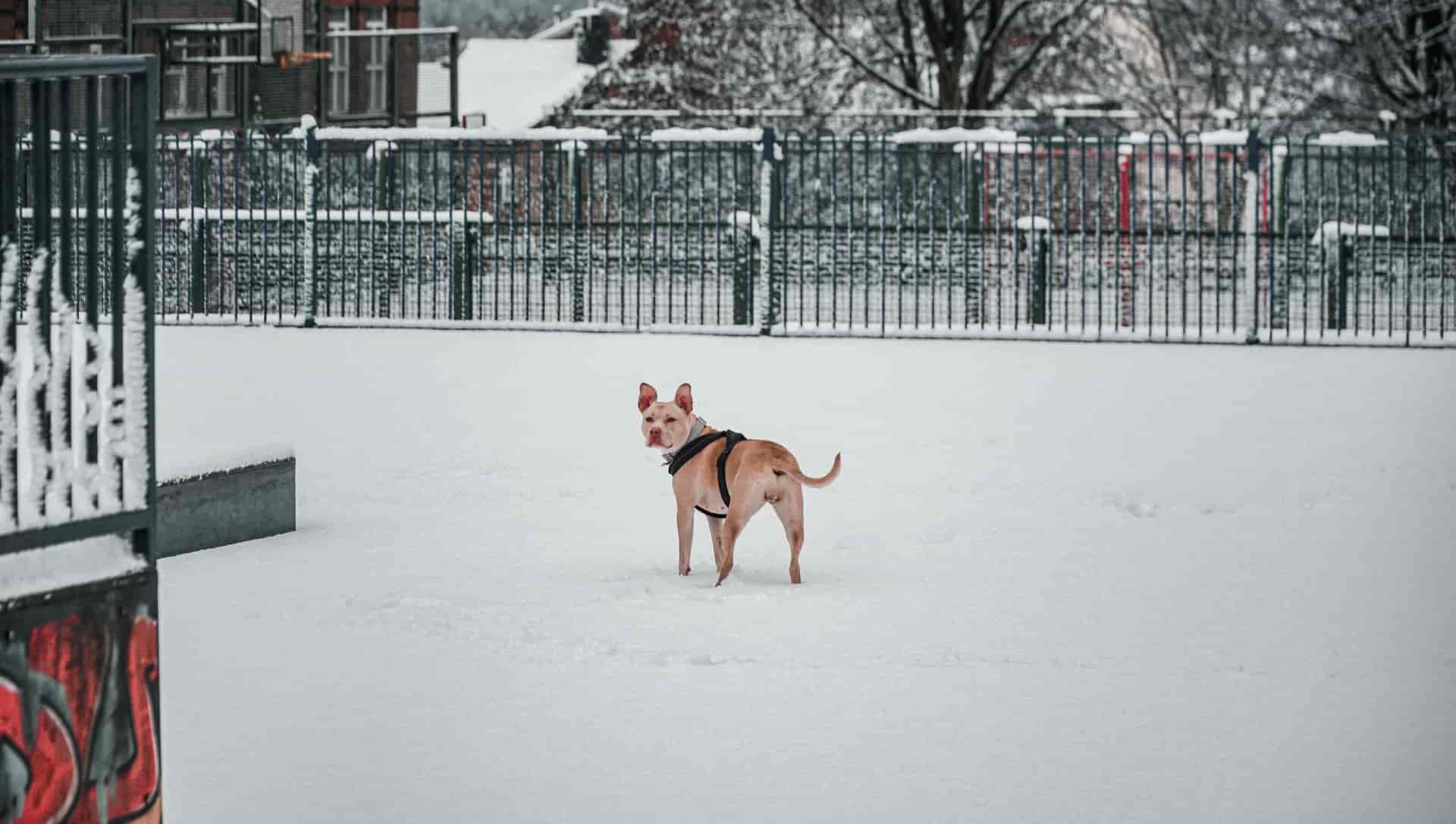 Apart from Pitbull owners, dog walkers or even Pitbull nannies confirm that the Terriers are energetic dogs. There is indeed a lot of uniqueness when it comes to the qualities of pups.

But, we can ensure that the amount of energy Pitbulls have is rare. They are so hyperactive that the owners need to arrange plenty of toys, workout tools, and exercise sessions for them.

It helps Pitbulls to spend their energy constructively. However, Pitbull owners often wonder at what age the dogs calm down. So, here we have presented an article answering it.

At what age do Pitbulls calm down?

Even though Pitbulls stay energetic throughout their lives, their hyperactivities calm down around the age of 12-18 months. Every dog stays super-energetic and hyperactive during puppy age. There is nothing new. But, in the case of Pitbulls, their energy level is incomparable. Still, when they turn 6-months-old, you can expect them to calm down more than ever over the following 6-12 months.

However, we always mention that there is no universal formula applicable to every Pitbull. So, if yours is hyper even after turning two is normal.

But always take the suggestions of your vet if you notice anything wrong with it. Hyperactivity in Pitbulls is common. They explore things, love to play around, feel enthusiastic while performing the workout, and even take strolls outdoors with their owners.

Until they spend all their energy and get tired, they do not sit still in one place. However, generally, Pitbull puppies feature hyperactivity and prefer to spend their waking hours energetically.

Although, through time, puppies of almost every dog breed learn to calm down and settle. It is the time when they hit maturity. As Pitbulls are no different, the hyperactive Pitbull puppies also calm down around 12-18 months of age.

Even though they stay more active than other breeds, a grownup Pitbull becomes calmer than a Pit puppy. Through the strict and regular training sessions, Pitbulls become calm and balanced dogs.

After the commencement of guiding, they stop showing any unruly expression that they used to show as puppies. Also, it is the regular workouts that help Pitbulls calm down a lot.

Causes of a hyper pitbull

Pitbulls are a generally active and energetic dog breed. Even though they seem a little calmer when they hit adulthood, their energy level stays incomparable with other pups.

Apart from the genetic legacy, multiple factors trigger the hyperactive nature of Pitbulls. Below we have shared some common causes that make Pitbulls hyper.

Having Pitbulls is like the experience of having an animal with a forever childish nature. As Pitbulls grow fast, they start to feature all the attributes of an adult dog when they become one year old.

Also, at this time, they hit puberty. But, even after getting matured physically, their mentality does not become mature enough. The childish nature of a puppy remains in the mind of a grownup Pitbull.

Another fact that can provoke the immaturity of Pitbulls is the lack of self-regulation ability. Pitbulls take time to develop their self-controlling power that regulates their energy level.

During the first four months of their lives, their immaturity, childish nature, and physical development trigger the energy level of Pitbulls to stay high.

But, from the fifth to twelve months of age, the reason for hyperactivity can be both immaturity and lack of training. Later, after their first birthday, slowly but steadily, Pitbulls calm down mentally and physically.

Your lack of attention can make Pitbulls hyperactive.

Indeed all pups require love, affection, and care. But, in the case of Pitbulls, they need your attention more than anything. If you do not take some time out of your busy schedule to spend quality hours with your dog, this phenomenon can cause your pet to be hyperactive and mischievous.

Always try your best to manage some time so that your Pitbulls do not feel lonely.

You can play with them, solve puzzles with them, and even Pitbulls can give you company while doing workouts. A lonely Pitbull can become anxious and hyper simultaneously. Your furry friend also wants some attention and care from you.

Hyperkinesis can be the reason.

Hyperkinesis or canine ADHD is a medical disorder that can make Pitbulls inexplicably hyper. If your pet has developed this health condition, it will show other symptoms along with hyperactivity.

The symptoms can include an attention-seeking attitude, short attention span, and impetuous nature.

So if your Pitbull shows any of these behaviors along with hyperactivity, then it is probably suffering from Hyperkinesis. In that case, do not any delay visiting the nearest vet clinic to avail of early treatment for your furry friend.

How to calm down your Pitbull?

Pitbulls are hyper-energetic and super active, and we all know this fact. But, what if we told you that there are ways to calm them down. It is impossible to turn Pitbulls into a calm dogs, but after following some methods, your dog can know how to regulate its energy.

But, all these are time taking procedures, so do not bear an unrealistic expectation before following the tricks. Below we have shared some steps that can help you tackle the hyperactivity of Pitbulls in a positive, long-term manner-

Provides them with plenty of opportunities to play

There are countless toys, games, and puzzles available in the market that can keep the mind of your Pitbulls engaged. Pitbulls are naturally hyperactive and dynamic.

But if they lack subjects to focus on, they become mischievous.

So, always teach Pitbull new games, sorting out puzzles, and other tricks to make them disciplined. All these not only occupy their minds but also offer Pitbulls some high-needed mental stimulation.

All play and no break, make your Pitbull hyperactive

Your Pitbulls indeed need playtime to spend their energy productively. But, extended gaming sessions and playing with no breaks can provoke them, producing more energy than usual.

It can make your pet hyperactive or super energetic. So, allow your Pitbulls to have some break or recess hours so that they can relax. Offer them an area to retreat, so the Terriers need not have to struggle to self-regulate.

Even though the break time lasts only for a brief period, it encourages them to rest and relax. The relaxation is strongly associated with the learning of developing healthy boundaries in the life of a Pitbull.

Level up the difficulty of their workouts

Pitbulls not only feature athletic physique, but they are also very enthusiastic about sports and exercises. Also, through regular workout sessions, they get a chance to spend their energy and become more attentive.

So, to reduce their hyperness, make their regular exercises more challenging. Add some extra miles while walking or running, introduce some new moves in workout sessions so that Pitbulls can explore their inner athlete.

Reward them with some treats

You can find yourself rebuking your furry pet for doing something wrong or expressing some inappropriate behaviors. It helps shape their mind to become obedient dogs.

But what about the good behaviors your pet shows? Like a human kid, Pitbulls also expect some love or return gifts after doing something good.

So, reward the calm moments and good manners your Pitbulls show with some treats or snacks. It prevents them from becoming hyperactive next time.

Will my Pitbull calm down after being spayed?

Yes, although you cannot see a drastic change in the behaviors of Pitbulls after spaying. There are some improvements you can notice in their responses. Spaying, which consists of removing the uterus and ovaries of female Pitbulls, provides behavioral improvements and curbs aggression.

Although spaying can cut down many risk factors in the health of a Pitbull, it does not make any visible calming change in them.

Spaying can calm down the dog, but it is not the most effective way. You can opt for spaying if your Pitbull is showing some aggressive sexual behaviors.

Do Pitbulls calm down after neutering?

Yes, male Pitbulls can calm down to an extent after neutering. But sometimes this cannot be an effective way. There is a common belief that Pitbulls experience calmness in their action after getting neutered, but it depends on several circumstances.

If your Pitbulls get castrated before even hitting the puberty stage, it does not make any difference.

However, Pitbulls, after hitting puberty, experience the behaviors caused by testosterone. That can include hostility, temperament, and rude behaviors.

So, if you neuter them after puberty, that can help in reducing aggression and territorial behaviors. Also, to get the best result, always perform neutering after consulting with vets.

Pitbulls are not everyone’s cup of tea. Only persons with patience can deal with Pitbulls for their hyperactive nature.

Also, while trying to reduce their hyperness, wait for them to get older. Maturity, aging along with other conditions, will automatically calm down your super energetic Pitbull.